Whenever we run a contest or quiz on this site, we offer the winner/s some kind of prize. Until now, we’ve never gotten around to showing what the prizes look like. So here, friends, is our current assortment of Freakonomics schwag. The T-shirt and yo-yo are, as they say, unavailable in any store. (So is Don King, as far as I know.) 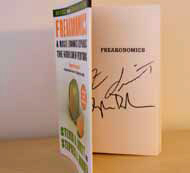 The hand-signed book. Occasionally we run out and instead send a copy with a signed bookplate (see below).

The yo-yo; back story here. 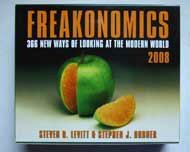 The 2008 fact-a-day calendar, produced and sold by Barnes & Noble. 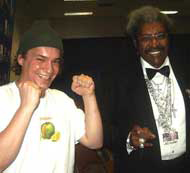 The signed bookplate. You can actually get one of these anytime you want, for free, here.

If today is Feb 28th, the 59th day of the year, and there are only 307 days in the year, then shouldn't Barnes and Nobles give me a 16% discount on the calandar?

Love, genuine love, is the most addictive thing. Can't get enough of it.

Rice & Prositutes have in common , the fact that they are available

They eventually both rot.

i dated a chinese prostitute for a year from the north city of shenyang and all i can say is to this day she doesn't eat rice.

Israel will be disolved as an independent state and become merely a democratic province of Palestine, not that much different from Connecticut. The United States will bring a large portion of the non-peace advocating population to its shores as refugees, of which some 10% will eventually be prosecuted for war crimes, along with over 90% of the United States Congressional denizens of this decade, though that will extend beyond 2009. In response, there will be world peace, and anyone voicing even a little racism or imperialism in policy will be laughed at for the radio ankle fitting they carry, and the small room they live in, alone, despised, but nevertheless basically free.

Isn't it obviously the IOC visit?

all the rubbish goes to "rubbish heaven" eh?

first clockwise, then if I concentrate I can span it to the other side. I have a Business Degree and a Master in Information services. I work in a library in the digital department.

When I first saw it years ago, it would spin just one way, counterclockwise.

Knowing that others may see it spin another way, I focused my mind on it and shortly became able to "alter" the spin at will. In fact I could make it swing back on forth--180 degrees--without actually making a turn. Now, whenever I glance at it, the "initial" spin I see could be either way.

It's a silhouette, so it's entirely up to you which way it goes. The key is in the straight leg, which is the axis of rotation. To alter the direction of spin, you merely have to imagine the leading leg is going *behind* the axis leg, and then behind it again. See what I mean? For a successful spin, you would of course need a pass *behind* then a pass in front, repeating that pattern.

If it's of any relevance, I have a degree in psychology and am artistically inclined (drawing, painting, music, writing, etc). Perhaps there is something wired into me that makes me able to perceive it both ways, but if you ask me, I was able to do it by using logic, not anything right-brained or spatial.

Freakonomics schwag? Really? Are you printing the book on hemp paper?

"Swag! Stuff We All Get. I basically decorated my condo for free with all of my swag."

who won your children's book giveaway?

Definite Clockwise by my perception...

both - thought i was losing it