An Online Economics Professor Reveals All

Online education is seriously on the rise, garnering praise from congressmen and even gaining share among elementary school students. In the realm of higher education, more and more schools are offering online degree programs as an alternative to in-class courses, with some schools creating online-only engineering and law degrees as well as bachelors’.

But have you ever wondered who’s on the other side of the computer, teaching these online students?

Jamie Gladfelter is an online economics teacher for schools across the country, including Midstate College in Peoria, Ill.; Lake Tahoe Community College in South Lake Tahoe, Calif.; Forsyth Technical Community College in Winston-Salem, N.C.; Southeastern Illinois College in Harrisburg, Ill.; and North Dakota State College of Science in Wahpeton, N.D. After getting his B.S. and M.S. in economics at Illinois State University, Gladfelter took a job at Midstate as an institutional researcher, and started teaching online courses. He lives in Chicago, but that is pretty much irrelevant. Here’s a look at his current sphere of influence: 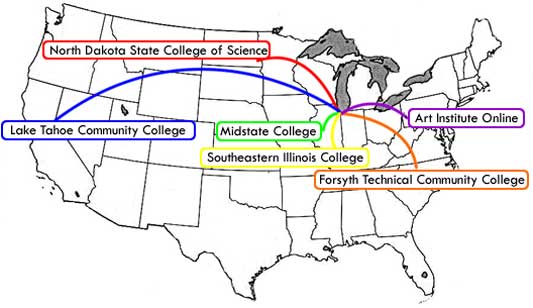 Gladfelter agreed to answer some questions about his online teaching.

Q: How do you put together your various teaching positions and your curriculum?

A: I taught an online class or two at Midstate College, where I was hired as an institutional researcher out of graduate school. I found out that I had to move from the area and began asking myself questions such as: “Why couldn’t I still teach my classes from Chicago?” This led to the question, “Why couldn’t I teach classes at any school in the nation from Chicago?” Almost every higher-education institution in the country offers an introductory micro or macroeconomics class. Community colleges and smaller private colleges are experiencing a lot of growth from their online course offerings. Community colleges also rely heavily on adjunct instructors. I decided I was going to specialize in online introductory economics classes and target community colleges. Talk about division of labor.

I found a great resource that would help me in this goal. I sent my resume and cover letter out to several hundred institutions from coast to coast, and was denied by 99 percent of the schools. I was, however, able to make contact with a few deans and department chairs who were looking to hire adjunct faculty for economics. Some of the schools already used remote employees, but others I had to convince. In a field as new as online education, experience is a trump card. As I added courses, I became more appealing to other colleges. I also invested in top-of-the-line software and hardware with which to market myself. I am now at the point where I turn down classes because I don’t want to overextend myself.

Q: Who are your competitors?

A: Personally, I am competing for course assignments with anyone who traditionally teaches at a community college: the middle manager M.B.A. at a local corporation who wants some extra money and wants to take on a class or two to boost his resume; or the full-time faculty member at the college who has no incentive to take on extra courses because it doesn’t affect his salary. I don’t know of anyone else who specializes to the degree that I do, so competition with like-minded individuals is negligible.

Q: For the students, what are the advantages and disadvantages of online teaching? And what about for you as a teacher?

A: For myself, in term of lifestyle, the most obvious advantage is the flexibility that it offers me. I can teach from anywhere I want, and for the most part, whenever I want. Rather than “take time off,” I simply work ahead. All things considered, the pay is decent. Most importantly, I enjoy the interaction with the students. Sure, it’s not the traditional “interaction,” but I can tell you this: when I took my first economics class at a four-year state university, it was in a lecture hall of more than 200 students. I didn’t exchange one word with the instructor. Compare this to one of my online classrooms of 15 to 20 students in which I e-mail or exchange posts with almost every student each week. As you know from working in print, it is possible to get people to see things differently without speaking to them.

Disadvantages for myself include the lack of face-to-face interaction with coworkers and students. Also, no one is telling me when to “get to work,” so the job requires some self-motivation. To help with this, I share an office with some young entrepreneurs in Chicago’s Loop. This gives me the type of social work atmosphere that humans tend to crave.

As for the students, the most obvious advantage for them is also the flexibility. Many of my students are working adults with families, so having the option of completing coursework whenever they can is important. We’re talking about people who are able to obtain an education who wouldn’t normally be able to. They still have to do the reading, complete the assignments, and participate in the class discussion, but they can do it from their home or office. This leads to the biggest disadvantage for students: more of the burden of learning is on them. Sure, they can (and do) send me questions whenever they don’t understand a topic, but to say that they don’t have to work harder to teach themselves in an online class versus a traditional class would be lying. There are times when a student just “can’t get it,” and providing individual tutoring, while possible, is harder.

Q: What do traditional economics professors think of what you’re doing?

A: I haven’t the slightest idea. If I had to guess, I would think their initial reaction would be one of condescension, contempt, and jealousy, followed by “That’s kind of cool.” There are a lot of large, for-profit online schools that need to be more closely scrutinized, but to say that an online education is automatically inferior to a traditional one is close-minded (see my lecture hall example above). There would probably be some insecurity about whether online classes would be taking away traditional teaching jobs, which, in the long run, I don’t think it will.

Q: What are the quality and nature of your online students?

A: As you would imagine, my students come from much more diverse backgrounds than you would find in a traditional undergraduate microeconomics class. There are several types of students, which I’ll rank by their frequency:

1. Late-twenty-something to forty-something working adults. These are students who started working right out of high school and have hit a wall in their careers by not having an education. Maybe they went to college at some point, but most never finished. Some of them excelled in school when they were there, and some of them barely scraped by. Generally speaking, this group requires the most effort to teach. There are always quite a few “stars” out of this group, but there are also adults who haven’t been in a math class in 15 years.

2. Early-twenties quasi-traditional students. These are students who may actually be attending another university, or have recently transferred. They are taking online courses because these courses are cheaper or more suited to their schedule. Their academic credentials are usually better than those of the first group.

3. Teenage go-getters. I’ve noticed an increase in the number of high school students who are taking courses online for credit. These students are able to satisfy their general education requirements with little cost, and enter a four-year university with a year of credits under their belts. Students in this group are usually very bright and have excelled in academics.

With the combination of academic credentials and frequencies above, the mean for academic quality (if there is such a thing) is a bit lower than one would expect from a group of 18- to 19-year-old undergraduates. That being said, if I was able to pick a dream team from all my classes, I would put them up against a group from almost any other school.