Here Are the Answers to Your Craigslist Questions 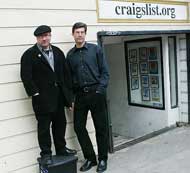 Last week, you submitted lots and lots of questions for Craig Newmark and Jim Buckmaster, the founder and CEO, respectively, of Craigslist. They couldn’t answer every question but I think you’ll agree they’ve given us a lot of good answers, time, and ideas. I was particularly intrigued by Jim’s statement that investigative journalism has actually been damaged by newspapers’ past financial prosperity. While I don’t quite buy his argument, I see the logic behind it. Another topic for another day. Thanks to Craig, Jim, and all of you for participating.

Q: What do you think of the challenges to Craigslist posed by Facebook, MySpace, and other social networking sites that have the ability to implement similar free classifieds (such as Facebook’s “Existing Marketplace“)?

JIM: As Mae West once said, “Imitation is the sincerest form of flattery.”

Q: How do you manage 450 massive classified Web sites with only 24 employees? More specifically, what internal processes and editing are involved?

JIM: We’ve bloated up to 25 staffers now, but the reality is that the 100 million Craigslist users prefer to manage the site for themselves, and are much better at it than we are. We hope they’ll remember us fondly.

Q: Do you care if something better comes along to replace Craigslist? Is your goal to enhance peoples’ lives, or to see Cragislist succeed? If something else came along that did a better job of enhancing peoples’ lives, would you acknowledge it as such and not fight it?

CRAIG: If something serves people better, they will vote for it with their clicks.

JIM: If there was a better Craigslist that was genuinely well-intentioned and sustainable, that would certainly make our lives easier.

Q: Do you have a favorite post of all time?

CRAIG: There’s the guy who wanted someone else to take the CPA ethics test for him. I’m also a sucker for people who’ve found lost dogs, or, in three separate cases, kidney donors.

Q: What was the first post ever to be posted on Craigslist?

CRAIG: The first emails had to do with Joe’s Digital Diner, and parties at the AnonSalon.

Q: Are there any plans to redesign the site and update its look?

JIM: A wag once said that Craigslist has all the visual appeal of a pipe
wrench, which we took as a compliment. But we are always trying to make the site easier to use, more accessible, and even speedier.

JIM: We hear that Craigslist is the cat’s pajamas in Canada, and it’s becoming more popular in cities like London, Paris, and Tokyo. Local language translations (duh!) should make our international sites more accessible.

Q: Please explain how the flagging process works. I have had several legitimate posts flagged in the past and have never received any response in contacting support to ask why.

CRAIG: With over 30 million people per month visiting our site, the most effective way to deal with bad stuff is to enlist the community in self-policing. So if you find an ad that’s wrong, please flag it, and if others agree with you and flag it themselves, then it’s removed automatically. Almost always, flagged ads that were thought to be legitimate later proved to have violated community-requested guidelines.

Q: Is Craigslist good at self-policing? (Meaning, is it at least twice as effective as our government, however that’s measured?) Or is the policing system really made up of norms and policies established by you two and your 25 minions?

CRAIG: What works for us is the culture of trust our community has built with us. We have two core values: treat others like you want to be treated, and live and let live.

JIM: Benchmarking Craigslist against the government is setting the bar pretty low, which we appreciate. Seriously though, I am continually impressed by the wisdom and fairness of Craigslist users in setting community guidelines and then enforcing them.

Q: Are you taking any steps to prevent real estate agents from killing the value of your site by incessantly posting the same apartments? It’s a huge waste of time to go visit apartments all over the place because crucial information isn’t included in the description, and real estate agents are withholding it just to preserve their stranglehold on the business.

CRAIG: We solved that problem in New York City by charging a small fee.

Q: Is Craigslist planning on cleaning up the spam? Will there be a paid subscription service eventually? I would be happy to pay $10 just to have access without spam.

CRAIG: Our community flags away most of the spam, but we still need help flagging … as well as help from Internet service providers, who aren’t proactive regarding the problem.

JIM: Of course, users don’t see the vast majority of spam submitted to the site, and I think we can make further improvements without resorting to draconian measures such as charging for site access.

Q: What would you like to see the Web do that Craigslist can’t do?

JIM: User generated governance (UGG) by a networked citizenry to disintermediate ineffective (or worse) politicians and lobbyists, in an ultimate expression of the democratizing power of the Internet.

CRAIG: Counter disinformation, particularly some of the stuff appearing on the Web regarding the forthcoming presidential election.

Q: I know you guys don’t want to sell out to make a fast buck, and I
appreciate that independent spirit. But you could be making more money by charging minimally for posting in certain categories. Wouldn’t it be worth it to obtain that money, and donate it to non-profits, charities, or other worthy causes?

JIM: The traditional philanthropic model is to make as much money as possible and then give a percentage back to the community. We do donate more than 1 percent of our revenues to charitable causes, but we feel it is much more important to serve the community directly as our primary business.

CRAIG: It’s more effective to let people keep the cash. We also see
that groups like the Gates Foundation have lots of money to donate, but it’s very hard to do so in a sustainable way. No one has really figured it out yet.

Q: With such an incredible amount of information on your Web site and in your databases, have you found uses for, or do you plan to use the site’s data in any way?

JIM: It sounds old-fashioned, but we generally don’t view information submitted by our users as data to be used for other purposes.

Q: How do you feel about your own media coverage? I see that Craigslist
often gets reported on as the de facto way of picking up prostitutes.

JIM: We’ve been hearing increasingly from newspaper reporters who confide that they are only allowed to write negative stories about Craigslist these days, because we’re viewed as competition by their newspaper’s business managers. And, obviously, sex sells papers, more so than stories about finding a used couch, so while we do follow our media coverage, most of our attention is devoted to direct feedback from our users.

CRAIG: We’re comfortable with anything honest, including good research and fact-checking.

Q: Tell us about the Electronic Frontier Foundation.

CRAIG: It’s a group that is doing a lot of the heavy lifting involved in online rights, including notable efforts regarding attacks on rule of law by crooked politicians.

Q: Do you like the movie 24 Hours on Craigslist?

CRAIG: I think it’s a pretty good film about the people who use our site in San Francisco.

Q: My personal experience is that Craigslist is extremely useful in the Bay Area, but not so useful in Des Moines, Iowa, where fewer people know about it. How do you generate the scale to make your service valuable? Have you advertised or considered advertising?

CRAIG: We really don’t advertise or promote in any significant way, and we don’t market the site. Word of mouth has worked well for us.

JIM: Surprisingly, postings to smaller markets like Des Moines often get more page views than ones in large cities where there are more postings competing for attention.

Q: Do you see a smart online business model for traditional media that will permit newspapers and other publications to continue to do deep reporting and attract talented journalists?

CRAIG: Not yet. While there are people working on it, like Jay Rosen and Dan Gillmor, no one’s figured it out yet.

JIM: Investigative journalism at traditional media outlets has been hurt badly by financial prosperity. The bigger and more successful the media companies get, the more likely they are to be dominated by bottom-line business managers, and from a business standpoint it makes no sense to alienate the most powerful persons and institutions, who by definition are those most in need of investigative reporting. Hence the lack of tough questions from well-funded media, leading to a misled public and situations like this disastrous war in Iraq.

Q: I’m surprised I couldn’t find any mention on Craigslist of the fabulous new “Craigslistlieder” songs with texts from actual Craigslist posts composed by the talented songwriter Gabriel Kahane and premiering this week at the Houston Grand Opera. Did you ever envision Craigslist becoming so ingrained in popular culture that it would inspire art?

JIM: No, but I often sing postings to myself when I’m in the shower.

Q: Do you ever hear success (or horror) stories that arose from your Missed Connections or other post categories? If so, what’s your favorite one?

CRAIG: I know a couple of people in the neighborhood who found their steadies via Missed Connections.

JIM: In addition to many “missed connections” that have resulted in love and marriage, we frequently hear of users finding high school sweethearts, old friends, and even long-lost siblings and biological parents. The odds are much better than they seem at first blush.

Q: Do you use Craigslist yourself? If so, in what areas?

JIM: I found my current job and several dwellings on Craigslist, and have bought and sold lots of stuff, and I use the discussion forums daily.

CRAIG: I’ve used it to sell my car, and to buy and sell small electronics, and sometimes to get the word out in causes I support. Now and then Missed Connections is just a good read.

Q: Do you find that the Craigslist boards in each of the different cities have noticeably different styles or are used differently? For example, years ago a friend and I contrasted the “tones” of the personals boards in San Francisco and New York.

CRAIG: In New York City, I’ve observed differences in the housing postings, since real estate is a blood sport there.

Q: As a longtime Best Of Craigslist fan, I’d like to know if the winning posts are based on the number of flags, or if there is a review process?

JIM: We try to winnow the nominations down to original postings that seem worthy of a laugh, a cry, or a think.

Q: I was recently looking for a TV on Craigslist, and I found a post about a free 42-inch TV in downtown Boston. Much to my chagrin, I emailed the poster and it ended up being a shady promotion. What (if any) safeguards has Craiglist put in place to prevent these scam-like posts from occurring?

CRAIG: Mostly flagging, but we also have measures we can’t disclose. Again, we could use help from some ISPs.

Q: How does one reconcile their inner anarchist with their outer corporate self?

JIM: I always tried to avoid having a corporate self, which was a bit career-limiting initially, but worked out okay for me in the long run.

CRAIG: For me, it’s mostly listening to my moral compass, particularly the whole Golden Rule thing.