The Man Behind The Dilbert Desk: Scott Adams Will Now Take Your Questions 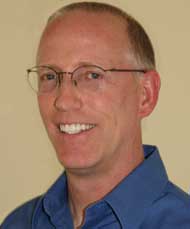 Although I’ve never been a regular reader of Dilbert — the silly newspapers I read most regularly, the Times and the Wall Street Journal, don’t have the good sense to run comics — I am a huge fan of Dilbert creator Scott Adams, thanks to his extraordinarily good blog.

After studying economics at Hartwick College, Adams took turns as a bank teller, financial planner, and other self-described “humiliating and low-paying jobs.” With no media or art background, he sold the Dilbert cartoon to United Feature Syndicate in 1989, and it now appears in more than 2,000 papers in 65 countries. He has published many, many books that have sold, in total, more than 10 million copies, including non-cartoon titles like The Religion War and his new book, Stick to Drawing Comics, Monkey Brain!: Cartoonist Ignores Helpful Advice, which is a collection of entries from the aforementioned blog. He’s also the former CEO of Scott Adams Foods, Inc., known for such nutritious creations as the Dilberito.

In a blog post yesterday about the new prediction market Predictify, I mentioned that the site’s featured bet concerned the sales of Adams’s new book. Adams has also blogged about the demographic patterns he’s noticed on the early Predictify returns.

Adams has agreed to submit to a Freakonomics Q&A (here are past examples) in which you, the readers, get to ask him pretty much anything you want. He’ll answer a reasonable number of the questions and we’ll post his replies here in short time.

Thanks to Adams for playing along and thanks in advance to all of you for the questions.