The Power of TV — or Is It Belly Buttons?

So this was a nice surprise: after I went on Good Morning America today to talk about The Boy With Two Belly Buttons, the book shot up to the No. 1 slot on Amazon’s list of best-sellers for ages 4-8. By the time you read this post, it may have slunk down the list, but for at least half a day it felt pretty swell to see Belly Buttons up there with Where the Wild Things Are; Alexander and the Terrible, Horrible, No Good, Really Bad Day; and Harold and the Purple Crayon (all of which, by the way, were suggested as answers to this post, which I will answer soon). In case you don’t believe me, here is photographic proof — and I promise that my computer skills aren’t nearly good enough to fake an Amazon page. 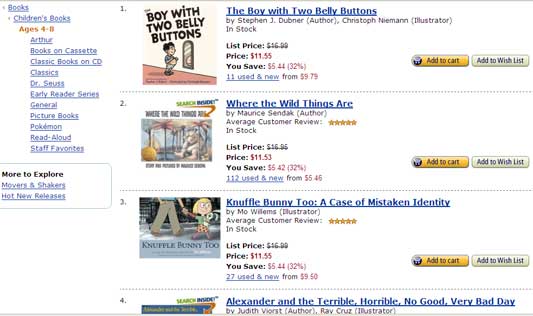 Is a book about a boy with two belly buttons really that appealing — or was it just the power of TV? In this case, I’ve got to vote for TV. The segment was incredibly well-produced. Unfortunately, I don’t have a link to the whole segment but here’s a slideshow that ABC made, and if you click here (at least for the time being), the top video in the ABC player (“Learning to Appreciate Differences”) shows the beginning of the piece, a “petaque” (collage) of young kids talking about what makes each of them different. I was happy and surprised to see my own son in there. (I knew he was interviewed, but I didn’t know if he made the cut.) And then I got to talk to Diane Sawyer for four minutes, which is my idea of a very good time.