The View From Mexico City

I was in Mexico City the other day, giving a talk at a conference sponsored by the Mexican Stock Exchange, which is considering going public. The conference was primarily an educational one (except for my talk). Among the big issues of the day: offering Mexican investors some of the shiny financial instruments that Americans are fond of, in particular REITs and (careful, now) mortgage-backed securities.

Sadly, I was only in town for a few hours, and since it was a Monday, most of the museums were closed. But I can’t wait to return: the people I spoke with (especially the university students) were smart and incredibly energetic, and I’d like to learn much more than I know about Mexico. (It was embarrassing to me that I live in New York City, where so much Spanish is spoken, and that none of it is spoken by me.)

In the meantime, here are a few snapshots: 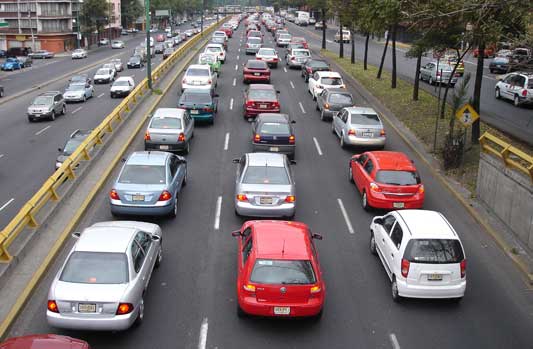 Yes, the traffic is pretty bad, but probably no worse than in most large cities. As you can see, most of the cars are small (including a lot of VW Beetle taxis), but lately American SUV’s have become popular. The fuel of choice is gasoline, not sugar ethanol as in Brazil, and the current price is about 8 pesos per liter, or roughly $3 per gallon. Interestingly, I didn’t see a single gas station that posted its prices in huge numbers, like every U.S. gas station does. 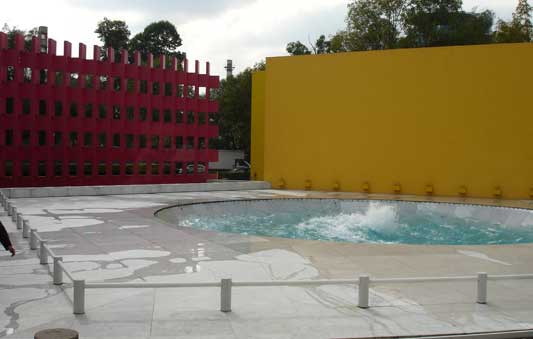 While I didn’t get to see any museum art, the colors and shapes everywhere you look are fantastic, bordering on otherworldly. This is the view from the main lobby of my hotel. The circular fountain is a wave pool, the most mesmerizing fountain I’ve ever seen. I could have stood and watched this fountain against the red and yellow walls forever. 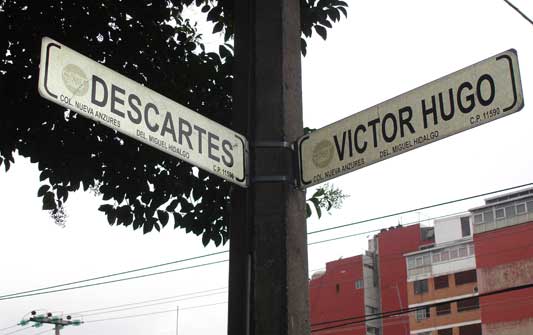 Here’s an intersection I came upon during my morning stroll. The intersection of Descartes and Victor Hugo: from what little I saw of Mexico City, that sums things up pretty nicely.