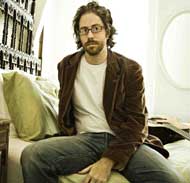 Singer/songwriter/Internet celebrity Jonathan Coulton may well represent the future of recorded music. A folk rocker perhaps best known for his hilariously deadpan acoustic cover of Sir Mix-a-Lot’s 1992 hit “Baby Got Back,” Coulton has demonstrated an uncanny ability to merge music with technology. A major Web presence with a pioneering attitude toward offering free content online, he holds the titles of “contributing troubadour” for Popular Science magazine (where he does a regular podcast) and “musical director” for comedian John Hodgman‘s popular Little Gray Book Lectures.

Coulton’s Web profile exploded a couple years ago when he began recording and publishing a new song every Friday as a free podcast called “Thing a Week,” and later released the songs in a series of albums on his own label.

Now, rather than sign with a known label and release songs subject to digital rights management, Coulton continues to post much of his original music on his website under a “pay what you want” model (sound familiar?), with all of his work falling under a Creative Commons Attribution NonCommercial 3.0 License.

As such, fans can download and use his songs in their own works (a concept with which mega-artists like Prince aren’t so comfortable), and can even create their own music videos.

In his bio, he describes himself as follows:

Coulton’s is the voice of every spooky elementary school kid who could never quite keep his shirt tucked in or shoes tied; every lovelorn mason and mad scientist; every one of us who has ever sat despairingly on the floor, surrounded by parts of an Ikea endtable, weeping over our allen wrenches.

He has agreed to field questions from Freakonomics blog readers, so fire away.