EULA Wars: The Customer Is Always Right … to Lodge a Protest

My friend and Peabody Award-winning journalist Jack Hitt is irked by EULAs (End User Licensing Agreements). They are the ubiquitous terms and conditions on the Web that no one ever reads. Jack can’t understand why, if he has to accept a seller’s EULA to get service, the seller doesn’t then have to accept Jack’s EULA in order to get his money. So he decided to run an experiment.

He recently signed up for a Web access deal at an airport. The deal included a EULA that was thousands of words long. To accept the deal, Jack had to supply an e-mail address. He offered up the following: TakemymoneyandnoEulasapply@aol.com.

This mischievous e-mail address represents a nascent movement to create a “battle of the forms” on the Internet. ReasonableAgreement has tried to get thousands of people to include the following boilerplate message in e-mails to EULA sellers:

READ CAREFULLY. By reading this email, you agree, on behalf of your employer, to release me from all obligations and waivers arising from any and all NON-NEGOTIATED agreements, licenses, terms-of-service, shrinkwrap, clickwrap, browsewrap, confidentiality, non-disclosure, non-compete and acceptable use policies (“BOGUS AGREEMENTS”) that I have entered into with your employer, its partners, licensors, agents and assigns, in perpetuity, without prejudice to my ongoing rights and privileges. You further represent that you have the authority to release me from any BOGUS AGREEMENTS on behalf of your employer.

You can even buy the following T-shirt with the disclaiming language: 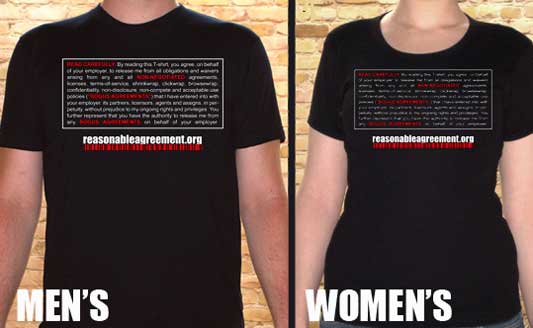 I’m not sure if I helped inspire this, or whether great minds think alike. A few years ago, Barry Nalebuff and I created the “LiabiliT,” which attempts to do the same thing with regard to those annoying signs in parking lots disclaiming management responsibility. Here’s a picture: 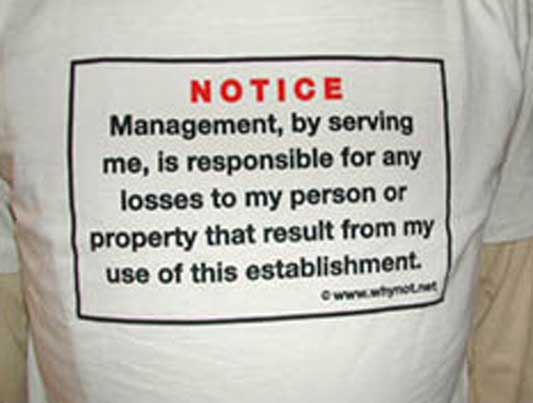 The 64,000 byte question is whether Jack’s e-mail address, or the e-mail boilerplate, or even a T-shirt will have any legal effect. Is there a space in Cyberspace for counteroffers?

Sellers have been presenting take-it-or-leave it deals forever. But the Internet has created the perfect no-bargaining zone. At the check-out, there is no way to cross out or modify oppressive terms. Under traditional contract law, if buyers and sellers have conflicting forms (sellers disclaim warranties; buyers resurrect them) and still end up doing business, the conflicting terms in the forms cancel out and the law imposes the generally pro-consumer default rules of implied warranties. This is how law handles the classic “battle of the forms.” The problem is that on the Internet, consumers don’t have an easy way to present sellers with the counter forms.

In thinking about this issue, it’s useful to separate the question of whether the seller’s or the buyer’s terms are reasonable. There are certainly plenty examples of obnoxious EULAs that have prohibited users from criticizing the seller’s product. But anti-EULAs could also be oppressive — for example, voiding even the reasonable restrictions of the Free Software Foundation’s GNU General Public License.

The crucial “battle of the forms” question is whether it is reasonable for e-retailers to adopt a hear-no-counteroffers policy. Even though I created the LiabiliT, I think there is a strong case for asymmetric legal treatment of buyers and sellers. Sellers have to keep going back to the market in search of new buyers, and thus have to worry about their reputations. For buyers, not so much. It’s a pain for either side to read the other side’s offers. But a seller’s need to maintain a reputation means that an unread EULA is more likely to be reasonable than the buyer’s piggish reclaimers. And do we really want sellers to have to spend money paying attention to the e-mail names and boilerplate messages of other consumers?

Here’s a possible way forward. It would be reasonable for a payment system, such as PayPal or AmEx or Citibank Visa, to create an anti-EULA form on behalf of its clients. For example, Google Checkout could require that a condition of accepting payment through their system is that sellers agree to some reasonable pro-consumer terms. If Jack then paid with Google Checkout, he would be protected by Google’s form. The seller wouldn’t have to pay attention to millions of individual consumer offers. Rather, it would just have to pay attention to its deals with payment intermediaries (who have their own reputations to protect).