What Do Brazil and Washington State Have in Common?

The answer isn’t that surprising in retrospect, but I’d never thought about it until I visited Seattle the other day and saw some statistics assembled by the Washington Policy Center. Here are some hints:

1. It has something to do with a post I wrote about Brazil not long ago.

2. It has something to do with water.

3. It has something to do with energy.

Yes: the state of Washington and Brazil both produce most of their electricity via hydroelectric power.

In 2004, Washington produced 70 percent of its power via hydroelectricity, although this share is down from nearly 86 percent in 1990. The biggest interim spike was in natural gas, but coal and nuclear also increased their shares. Here are the shifts over time:

Although it has lost hydroelectric shares, “Washington’s hydroelectric power industry is the largest in the Nation,” according to the U.S. Dept. of Energy, “and generates more power each year than any other state’s entire renewable energies program.” Take a look also at this interesting but outdated U.S. Geological Survey site about hydroelectric power.

During my visit, I got to spend a few hours fishing for salmon with my brother on Puget Sound. We didn’t catch anything, but it was great to be out on the water, and also a little weird. Why weird? Because even though our little motorboat was surrounded by seals, seagulls, and other seabirds (every animal, it seemed, except for fish), in the midst of this incredible nature scene we were passed by a gigantic OOCL (Orient Overseas Container Line) cargo ship, carrying what looked like enough merchandise to stock 10 Wal-Marts. The juxtaposition of nature and commerce couldn’t have been starker, as you can see: 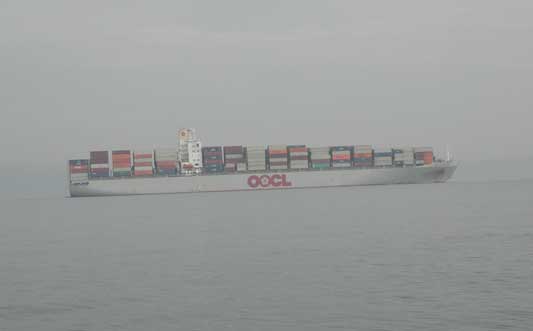 The trip got even weirder when we started getting buzzed by a couple of helicopters and a Coast Guard cutter. On the radio, we heard that four life jackets had been spotted floating in the water, along with a couple of oil slicks. But in the paper the next day, I read that no one had been found or even reported missing, so hopefully it was a false alarm.