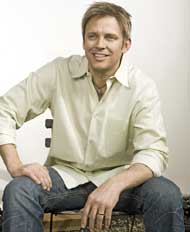 You could argue that Philip Rosedale has done more than anyone else to help millions of people live their dreams. As the founder and CEO of Linden Lab, the San Francisco-based company that created Second Life (which we’ve blogged about now and again),
he has taken virtual reality to a whole new place.

A technology whiz since childhood (he built his first computer in the fourth grade), Rosedale started a computer software company in high school and eventually developed FreeVue, a video conferencing system for PCs. After his startup was acquired by RealNetworks, he became the larger company’s vice president and CTO. In 1999 he left to start compiling research for Linden Lab, and in 2003, Second Life was born.

Now, with 11.2 million registered users (about 1 million of whom have logged in during the past month) and with nearly 4 billion “Linden Dollars” a year being spent on property, goods, and services (of all kinds), Second Life has become the most prominent truly interactive virtual world in history. (It is so prominent, in fact, that IBM makes fun of it in a recent commercial.)

Rosedale has kindly agreed to answer questions from readers of this blog, so fire away.

How do people find the time for a Second Life? Most people are too busy working multiple jobs and trying to keep up the payments on their credit cards and upwardly-adjusting mortgage payments. I guess the answer could be "let them eat virtual cake".

Have you ever read "Snow Crash" by Neal Stephenson? I don't know much about Second Life but it sounds similar to the Metaverse in the fiction novel.

What security measures do you take to prevent fraud and abuse? Do you have a dedicated security team?

Do you have macroeconomists regulating the supply of Linden dollars? Are they Keynesians? Monetarists? Does the economy experience inflation?

Linden Lab has talked before about the long-future possibilities (and challenges) of connecting to or communicating with other grids and virtual worlds.

Do you feel that this is an actual possibility rather than just a pretty dream? What impact do you think this would have on Second Life's economy?

A dutch teenager was recently arrested for virtual theft in a hotel virtual environment. Has there been any similar type of virtual crime in Second Life that may have/had real-life implications for the perpetrators?

How do you feel about accusations that by providing a literal "second life" you're contributing to a trend of physical isolation thats damaging the social abilities of an increasing number of teens and adults?

Mr. Rosedale
Second life is not working out for me. In fact, it is almost worse than my first life. Do you have a Third Life option I can move to, since 1 and 2 are dead ends? :)
Moe

Why not open up to allow Second Life to run on consoles?

Alright, i'll be the first to ask. My question contains two words, 'open' and 'source'. Not when will it happen, although that's nice to know too, but how will you make money? I'm sure there's a lot of 'developers', yours truly, waiting in the wings for this to happen, but we want to be realistic too, can it be a win-win situation? Is, perhaps, finding a middle ground between open API's on one end and completely open souring the code on the other, a more realistic probability? Sorry to ask, but someone had to. Thanks Phil.

Recently social networking sites have started to standardize on interoperability protocols. Do you see this happening with virtual worlds? Can you see embracing standards such as VRML or X3D? Might there also be exchange markets for virtual money?

Expanding on comment No. 2:
Linden Lab is very much acting as a government entity inside Second Life.
Do you think having an official 911 on-call Police department with in-world agents is the responsibility of Linden Lab to protect its residents against trouble makers in a timely fashion.

My parents are in their 80's and plain don't get the difference between a video game and virtual worlds. They're not alone. I've tried all kind of explanations and descriptions to no avail. Here's something that might help; A wonderful enterprise (innocentive.com) provides a free-market place for companies and non-profits (called seekers)to post problems in need of solutions to the outside world (solvers) in exchange for financial reward - same principle as the X-prize's (also very cool concept). Would you be interested in matching a $5,000 reward (so $10k total through Innocentive.com) for the best philanthropic or social-engineering idea(s) that can be implemented in-world for the benefit of the outside world? I think it might help me immeasurably in trying to make my point to them. Telling them about the first person to make a million dollars selling real-estate did nothing, people make money on video games too they responded - Aaargh, HELP!

Why do you think 2nd LIfe is a good idea?

Second Life is a fantastic place, and one of the reasons is the freedom the residents enjoy to create their own environments. On the other hand, for those who are not (yet) in Second Life, the learning curve is steep and a lot of first time visitors seem to get lost or don't have a clue what could be in it for them.
Do you consider it a task for your company to make Second Life a more welcoming place for newcomers, or should this issue be tackled by the residents themselves?

Where do you see virtual worlds in ten and twenty years? What are some key attributes that will develop? What level of influence will they play in our life? Thanks.

Are you worried that restrictive international laws like those of germany, will pose a greater problem for SL in the future ?

Do you know anything about how the economy in Second Life compares to standard efficient market assumptions?

The When gambling was forbidden in second life, Linden Labs simply erased any and every casino and gambling facilities, with no previous notice, nor refund. This, together with the "obscure" Linden Dollar currency can make Linden Labs look like a scam system. To that, even a slight change in the currency, say from US$1-L$270 to US$1-275, brings Linden Labs a huge profit at no effort.

With that in mind, what can a company intending to invest in a virtual presence for their brand expect from Linden Labs? Some safety? Or are they at their own risk there?