If you go into the cafeteria at the University of Chicago’s Graduate School of Business, you will come upon a rather extraordinary display in the soda case: 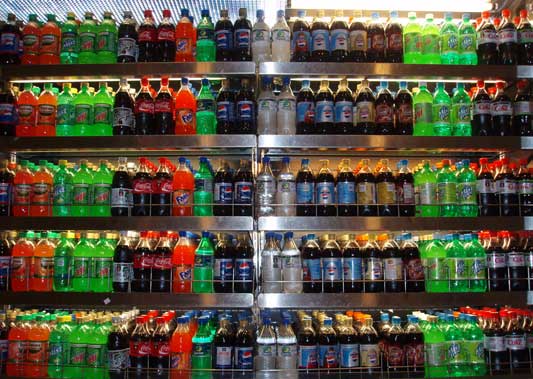 It reminded me of a Mondrian painting, maybe “Broadway Boogie Woogie.”

As it turned out, the man responsible for the display was standing nearby, and we fell to chatting. His name is Derek (if I remember correctly). He is in late middle age, grew up in Hyde Park, and is himself an artist. When I mentioned Mondrian, he smiled, but said it was really Warhol that he was going for with the soda display.

It was fun to talk with someone who took such pride and interest in a work task that many people would not consider worthy of pride and interest. (Alas, Derek wasn’t interested in being photographed with his work.)

I know that the soda display drew me in, and made me buy a soda, which I hadn’t meant to do. On the other hand, I wonder if the Mondrian/Warhol extravaganza may be too chaotic for other customers, or even if some people may not want to buy a soda because they don’t want to disturb the display?