What Do You Mean by the ‘R-Word’? A Guest Post

There’s been plenty of talk in recent weeks that a recession is coming (or that we are already in recession). Indeed, the latest reading from InTrade.com suggests that there is about a 70 percent chance of a recession – defined as two consecutive quarters of negative economic growth – in 2008.

It is an interesting story, but today’s pessimism does not sit easily with the general optimism of macroeconomists over the past decade or so (a point made by David Leonhardt in the Times). Researchers have dubbed the period since the mid-1980’s “The Great Moderation,” arguing that while the business cycle may not have been beaten, it has certainly lost its bite. Careful studies of this transformation suggest that the ups and downs of the business cycle have been dramatically dampened since around 1984. Since then, nearly all measures of economic activity have become less volatile. The forces behind this moderation remain something of a puzzle, but they extend beyond monetary policy, and hence, this is not just a Greenspan effect.

The graph below shows that the amplitude of the business cycle roughly halved since the mid-1980’s. And yet the commonly-used yardstick of a recession (two quarters of negative economic growth) remains unchanged. This observation should give some optimism that even the confluence of several factors slowing the economy may not trigger a recession. 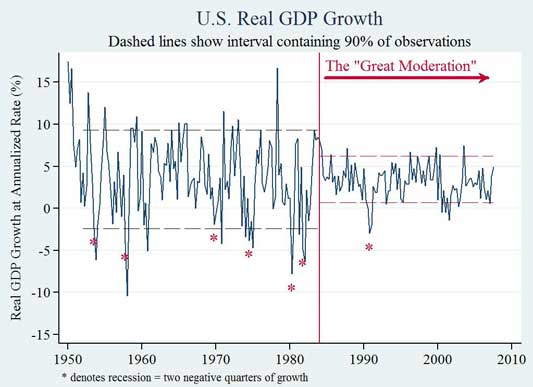 So this brings me to my question: are those who are using the R-word suggesting that the “Great Moderation” is over, or simply that we are facing an especially unusual set of adverse business conditions? Or was there never any real change in the structure of the economy, and the last couple of decades have been simply a statistical fluke?

My guess is that different answers to these questions can explain why some forecasters have divergent forecasts. But I have been surprised by the failure to speak directly to these questions, as the long-run implications of the competing explanations are important and very, very different.