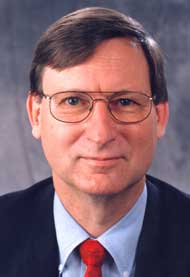 Often the value forgone of Pirated music and softwre is calculated by multiplying the number of illegal downloads by the value of those downloads if sold at full price, ignore elasticities and the like. To what extent can these be measured in a environment where data travels almost without restriction and how would it assist those industries that are affected?

How much economic analysis can be brought to bear on the "Net Neutrality" debate? Are there useful, reliable ways to model the likely economic impacts of policy decisions in this area?

Is supply-side economics bonkers because it's missing half of the equation (viz. demand)?

What do you see as the root causes of high health care costs in the USA. Which of these are amenable to correction? Which are not?

"Google's mission is to organize the world's information and make it universally accessible and useful."

Historically, consumers have obtained news from only a few sources. The newspaper, newsreels prior to motion pictures, the radio, and the evening news broadcast. With the explosion of the Internet, 24/7 cable television, and wireless connectivity, our methods of obtaining content have changed drastically. No longer is news simply taken for granted, and is often blended with entertainment. Consumers have much more choice, both in terms of format and content, and often choose media which conforms to their particular bias or viewpoint.

Many argue that the mainstream, traditional media are biased. Even if true, that worries me far less than what appears to be their imminent demise, particularly at the local level. What's the future for the hometown newspaper, and what mass medium, if any, will replace it?

Do you think more PhDs in IO and marketing will migrate to jobs in the private sector (industry, not just the types of consulting that have always existed), in the way that those in finance have been for some time now?

In most economic PhD programs, passing the first year is dependent on understanding your book (or Mas-colell's) completely. What effect do you think this weeding out process has on the characteristics of future research economists? As someone who failed out of a top PhD program because of micro, yet remained in the profession, I wonder: is is possible to be a successful economist (academic or otherwise) and not have a deep understanding of the mathematics behind microeconomic theory?

Your job sounds extremely interesting. What jobs would you recommend to a young person with an interest, and maybe a bachelor's degree, in economics?

Sir,
Could you please comment on what you think about the Microsoft-Yahoo merger? Do you think it will happen? If so, what would it mean for Google and for the internet as a whole?

From Microsoft's point of view, do you think the merger is a wise strategic move?

What methodologies to you recommend for computing the market value of "information" as a "product"? While I'm sure that Google, being in the information business, has some proprietary tech in this area, I'm hoping that there is enough unconstrained IP for a reasonable answer.

In recent decades, do you believe that America's demand curve for non-essential goods and luxury items, especially those in the tech sector, has undergone a shift? It seems as if people who traditionally would not have the means to spend on such items are lining up for high-end laptops, HDTVs, and blu-ray players. If there has been a demand shift in this market, what is the impact on google?

Which of Google's current projects has the most profitable growth potential? Also, does Google view the audio/tv/print ads within AdWords as replacing ad agencies or opening up the broadcast mediums (radio/tv/print) to smaller advertisers?

What books, theories, thinkers would you recommend to an undergraduate studying economics, with a strong bent towards the philosophical and political underpinnings of the discipline? By the way I'm currently studying your Intermediate Microeconomics for class.

Many observers anticipate severe oil shortages over the next decade. However oil futures go out as far as December, 2016 and show oil prices as being actually lower than today. How would you explain this discrepancy? Is this a market failure, allowing high profits at low risk, particularly via options that could increase 10 times their value if oil doubles or triples in price? More generally, is there a better way of estimating future prices than by looking at commodities trading?

Sir,
From an economic point of view, what is the difference between Microsoft's market position in desktop software and Google's position in internet search and related online applications?

1) How can we explain the fairly entrenched position of Google, even though the differences in search algorithms are now only recognizable at the margins? Is there some hidden network effect that makes it better for all of us to use the same search engine?

2) Does the current search market share anything with the early volatile market which saw engines like WebCrawler and Lycos rise to the top and then become overtaken every year or so?

Thanks so much for your insights, hope you get this far down in the list!

Seems there's no good way to properly account for the capital expenditures that firms make these days -- lots of it is software or R&D that's expensed, leading firms that want to manage earnings (all of 'em, as far as I can tell) to under-invest.

But business plans are changing so soon, lots of it is obsolete before it's completed.

How will this new technology-driven challenge change the business economics in the US?

The more successful an artist is, the more likely their work will later be resold at auction for a huge markup — and they receive nothing. Should that...