It is devilishly hard to lose weight.

A randomized control year-long study looked at the impact of four different diets (Atkins, Ornish, Weight Watchers, and Zone Diets) on a group of overweight and obese subjects who were looking to lose weight. The diets produced only “modest” average weight loss of about 6.4 lbs (2.3 percent of original body weight) and found no statistically significant difference in weight loss for the four different diets.

People do a pretty good job of losing weight for about half a year, and then their weight tends to drift back toward their pre-diet number. The difficulty of sustaining weight loss can be seen in this figure taken from a 2-year randomized study of the Weight Watchers program: 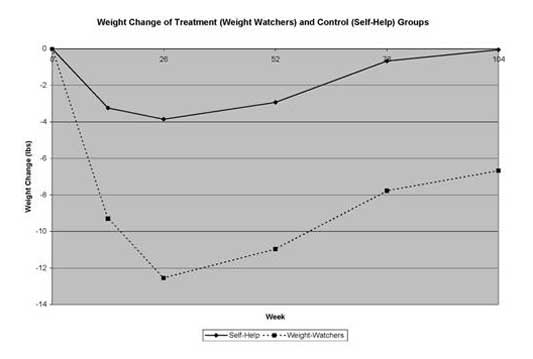 My personal experience with dieting has followed a similar pattern. Like many others, I went from being a skinny twenty-something who couldn’t gain weight to a forty-something who couldn’t keep it off. In the last decade, I’ve yoyo-ed several times. I’d take off a bunch a weight, but by the end of the year I’d put it all back on plus a little extra.

Until this last year, when I did something different. As described in this L.A. Times op-ed, I put $500 each week on safely losing and keeping off my extra weight. You can see what happened in this graph: 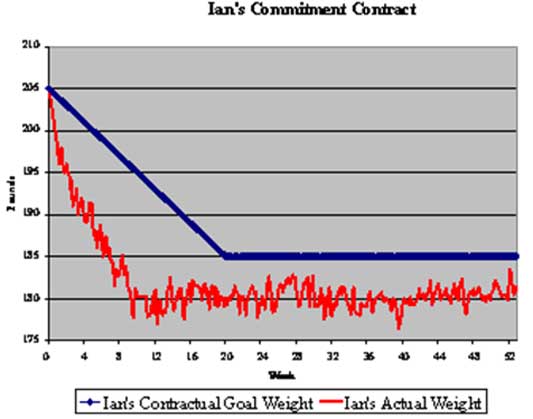 I originally had to lose a pound a week (or else lose money). Then I had to keep my weight below my contractual target of 185 pounds.

In contrast to Weight Watchers, which can cost about $500 a year and helps you lose on average 6 or 7 lbs (about 3 percent of your initial weight), I put $500 at risk each week. In equilibrium, I’ve lost 25 pounds (12 percent of my pre-diet body weight) and so far it has cost me nothing.

The rapid weight loss at the beginning of the graph is not remarkable; I’ve lost weight quickly several times before. What’s remarkable is that I kept it off for the second half of the year. And I’ve signed up again this year to do the same thing. You can follow my progress here.

As Levitt has written, I also helped create a Web site called StickK.com, where you can enter into your own commitment contract to do all kinds of things.

For me, it’s been surprisingly easy — five hundred bucks is a lot of money. And while the prospect of losing 25 pounds is daunting, it’s not that hard to lose a pound a week when the alternative is to lose $500. Indeed, StickK contracts invert the normal commitment problem. Usually it’s easy for people to make New Year’s Resolutions, and much harder for them to live up to them. With StickK, it’s actually relatively easy to keep your commitments – especially if you put enough at risk, or if you designate an anti-charity to get your money if you fail. The harder part is getting yourself to make the binding resolution. Some people are reluctant to enter into a contract that commits them to real change.

Tyler Cowen at Marginal Revolution thinks it’s so hard to get people to change that he has predicted that the site will not succeed:

I’ve long predicted this won’t work; one group of potential customers doesn’t really want to change, the other group is unwilling to give up control. It’s not exaggerating to say that human nature is on the line here, and that if I am wrong this is probably the most important idea you will ever encounter.

But the good news is that the first returns are very positive. In a little more than a month since launching, people have given us $80,000 to help stickK to their goals. What’s more, most people are keeping their commitments and getting their money back.

People who really want to change are willing to give up some of their ex-post freedom. StickK not only helps you make credible commitments for yourself, it also lets you communicate that commitment to other people. Commitment contracts aren’t just for people who have trouble keeping their commitments; they are for anyone who is concerned about hearing some promise that just sounds like so much “cheap talk.” We’ve all been in the “Lucy holding the football for Charlie Brown” situation, where we’ve heard people make promises that we suspect are insincere, or we think the promisor one way or another isn’t likely to follow through. One of the coolest things about StickK is that it gives the rest of us a new way to respond to cheap talk. At last, we can demand that the promisor put some money where his or her mouth is.