I just happened to be working on a story about traffic accidents while reading your March 10 post on the subject and I thought you might find my story of interest. 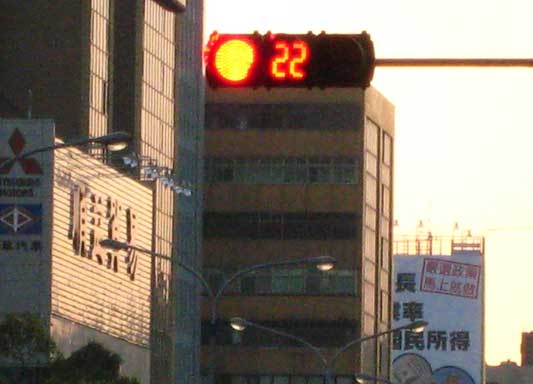 It’s a fact that a certain number of accidents are caused both by people who jump the gun on the red light, and those who try to make it through the intersection after the light has already turned red. Ostensibly, the reason for the timers was to give people more precise information about exactly how much time they had remaining before the light changed, in the hope of reducing accidents.

In Russia the Yellow lights comes on with the Red a few seconds before the change to Green, so drivers have a 'Green soon' warning.

It seemed to be used as a chance to put the car in gear and rev the engine. I saw babooshkas literally running for their lives to get out of the way of the oncoming traffic. With good reason. Enough near misses convinced me that that driving population wasn't going to hit the brakes for a mere pedestrian.

All the newly designed intersections Xiamen, China implement this feature. The new intersections replaced roudabouts of mid-90s vintage which were an abysmal failure...country people driving the wrong way round, people stopped in the roundabout, bicycles cutting straight across, etc. The city replaced most roundabouts with multi-lane signalled four-way intersections.

Which brought their own problems, for ex. it's common practice in China to turn left from the right-hand lane, or drive short distances the wrong way down a busy street if you need to make a left off that street. Add in bus drivers who simply ignore red lights, and ALL drivers who jump the instant a light turns green, and these new intersections proved almost as disastrous. The timers -- based on the models of Taipei and Singapore -- were intended to forestall accidents occurring when lights change.

(There's also a charming law where in any accident -- no matter how minor -- the police must be summoned, and you are not allowed to move your car until they arrive. That does wonders for traffic flow.)

Eventually the city set long times for these intersections, often 2 or 3 minutes or more. (The thinking: because most accidents happen when the light changes, change the light less frequently). When you have 200 seconds of sitting through your third or fourth light change at a clogged intersection ... oh man that timer is excruciating.

Poster #7 has it right. Knowing the cost of waiting for the red light allows drivers to weigh that against the alternative.

On the other hand, any basketball player will tell you that seeing 3 seconds on the clock encourages you to make that crazy shot from halfway across the court. Only in this case it's a car, and not a ball, and when you miss the window someone gets hurt.

How to eliminate ALL accidents. You won't see even a fender bender here: http://vids.myspace.com/index.cfm?fuseaction=vids.individual&videoid=1066519

I should also add that there are a few "red light" cameras to catch people running reds. I think this would be more effective, and I'd like to see those more.

I live in Taiwan, and the countdown timers have been here since I arrived almost 4 years ago (increasing in numbers). I don't dispute the numbers reported by Mindich, because I can only assume they're true.

But let's just consider the fact that Taiwanese traffic is fairly chaotic. Not as bad as in China or Vietnam, but still pretty bad. Scooters are a big problem as far as traffic control. The number of scooters on the road exceed that of cars, and liberties are taken by scooterists because it's just so darned convenient. I know, I scooter. Scooters cause complications in traffic, but you can't remove them, otherwise everyone will be sitting in their cars going nowhere fast.

I can very much imagine that people try to squeeze into the intersections in the dying seconds of a green light... because no one cares if they're in the intersection blocking off other cars going perpendicular. As long as they can get into the intersection, they've won. All rules are bendable here, and everyone seems accepting of that fact. I can ride my scooter on the other side of the road, and as long as I stay close to my left (incoming traffic's right), no one will honk me, they'll just go around me.

If the traffic lights don't have timers, the crosswalks often do, which are great -- a little "walking" green guy equipped with a countdown timer, and what's cute is that he walks faster as the timer gets closer to 0.

The clock allows a vehicle in motion that is approaching a red light to 'time' his arrival (to avoid stopping, improve gas mileage, etc.; I'm guilty of doing this, as I sometimes crane my neck to view the 'cross traffic' light to see if it's changing).

This practice would effectively allow a car to proceed into the intersection more quickly at a 'fresh' green light, which could be a bad thing -- it would make it more vulnerable to a crossing vehicle that runs a red light.

hmmm...this sort of tech was adopted in India long back at major intersections.

They also have these in India in large cities at intersections where the wait times are long. However, there is another very important benefit to these lights. Drivers of cars and rickshaws can turn off their engines at red lights and turn them back on when there is only a few seconds left. While the amount of gas saved per vehicle is miniscule, over time and over many vehicles it adds up to a large energy savings.

I am living in northeastern China right now, and my city has timed lights at most intersections, as well as several large traffic circles like #17 mentioned (and the driving on the wrong side of the road issues). I do see people jump the red lights when there's only 10 seconds or so left on the timer, so I don't see much use of them when driving, but as a pedestrian they're quite helpful. Since pedestrians never really have the right of way, generally you're less likely to get hit by a car/bus turning left if you cross the street during the last few seconds the crosswalk light is red. Oncoming traffic is slowing down/stopping, but the cars turning left across your path (which are harder to see/dodge than the oncoming traffic) still have the red light, giving you time to run across the street relatively safely, or at least as safe as street-crossing here gets.

Re #29. It could be interesting to study the case of France which reduced by half the number of road casualties in 2007. The minister at that time (who is now the current President by the way) who implemented a few measures to reduce road casualties took most credit for it, but it would be interesting to study whether the decrease should indeed be attributed to the measures taken (such as the increase of the number of speed camera on roads, more stringent application of fines) or as some suggest more simply by the technological and safety improvements of cars during the past 5 years? Interestingly the number of accidents and the number of people injured increased during that same timeframe, which thus make them think that it is more the technological progress - which make us die "less and less" in our cars - which could explain these results.

Stick a speed camera on the intersection as well and see how many more people speed while trying to beat the red light.

I too don't see how the red light countdown will make that much of an impact. And as for prolonging time, that wouldn't work because people will adjust to this new creation of "a second". Just like how setting the time on your watch 5 minutes ahead loses its effect in the long run.

Solution: People that cause accidents should not be allowed back on the streets. Take away their driving privileges as they do for DUI offenders and make them find another way to get around.

Green light countdowns affect people already traveling at speed. Either they stop or they speed up so that their speed when the light changes will either be 10-15 mph over the limit or 0.

Red light countdowns will usually impact people stopped at the light. When the light changes, drivers could gun the engine, but regardless, most drivers' speed will be close to zero mpg.

Important consideration I didn't see mentioned. Is Taiwan traffic more like that of the US, where people hurry at the end of green lights, or certain other countries (Germany comes to mind), where getting an early start is possibly more of a problem.

I think the reason why green light countdowns cause more accidents is that people will tend to focus more of their attention on the countdown as opposed to whats happening in front of them on the road, especially during the last few seconds. If you're continuously peeking at the timer while speeding through an intersection, your likelihood of getting into an accident will only get higher (i.e. if the guy in front of you cuts you off or something).

Either way, people will be more inclined to focus on a timer than they would be on a regular traffic sign... its just whether or not that focus is distracting them from more important things.

The reason incidents go down with the red light is it is easier for someone to handle 27 or even 60 seconds as compared to the all saying NO "red" light. no one likes to hear NO! but stop for now, and in 60 seconds you can go is so much easier for a child or person to handle.

the intent behind the timer shows compassion.

the concern would be the drag racer who watchs the clock and not the intersection.

The lights should obviously have a saftey overlap.

Someone in India told me that the red light timers in Bangalore were mainly to reduce "waiting for the light to turn green" road rage.

I think the reason the red light timer works is that many of the most dangerous accidents occur when some one runs right through a red light. I have to admit, I've spaced out before & done it & was very lucky to go through when nobody was crossing. I think the changing number is more likely to catch drivers' attention, and someone spacing out is more likely to realize they are coming to a red light. My guess is that it has more to do with that than it has to do with people cheating on the margins.