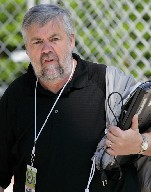 Bill James has been writing about baseball since 1975. He is Senior Baseball Operations Advisor for the Boston Red Sox, and is the author of The Bill James Gold Mine 2008.

This would be the equivalent of a George Washington bio that said:

George Washington was a colonel and then a general during the U.S. Revolution, and then he became President.

Bill James hardly invented the statistical analysis of baseball, but over the past 30 years, he has done more than anyone to turn it into a science. His Wikipedia page gives a pretty good overview of his achievements; it is also worth visiting the Society for American Baseball Research (S.A.B.R.), which allowed sabermetrics to become a way of life.

With a new baseball season about to begin, and with his Red Sox pursuing their third World Series title in five years, Bill has agreed to take questions from readers of the Freakonomics blog. So fire away in the comments section and we’ll post his answers in a few days’ time. Thanks to Bill and all of you for participating.