Got a Question for Newt Gingrich? 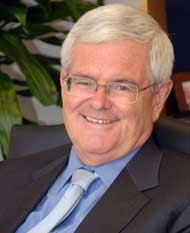 Readers of a certain age may think of Newt Gingrich as a book critic, prolific author, and regular TV guest. But before that, he was one of the most powerful politicians in the land. A former history professor at West Georgia College, Gingrich was a long-serving congressman who, in 1994, masterminded the Contract with America, which helped the Republicans win a majority in the House of Representatives for the first time in forty years, and helped Gingrich become Speaker of the House.

After a poor Republican showing in the 1998 Congressional elections, Gingrich stepped down from the speakership and left Congress.

His latest book is Real Change: From the World That Fails to the World That Works. I haven’t read it yet, but I recently heard Gingrich interviewed on Tavis Smiley‘s public-radio show, and Gingrich was full of smart takes on complex issues. Here’s a bit from the book jacket:

Are you fed up with bickering politicians, self-satisfied bureaucrats, and a government that never seems to address the real problems facing our country? Can we create a government that is small, efficient, and responsive — from the state house to the White House? Is that kind of real change even possible? … As Gingrich points out, the American people are united on almost every important issue facing our country — including immigration, taxes, defending America, and freedom of religion. … Gingrich reveals why the Democratic Party can’t deliver real change and why the Republican Party won’t. He provides answers and a step-by-step, issue-by-issue toolkit for building a better America — the safe, innovative, and dynamic America we all want.

Here’s a brief taste of the book (and see this MSNBC link for an accompanying video):

The story of this book is in many ways the story of a video. Last summer, I posted a portion of one of my speeches on the popular Web site YouTube. It was a short, three-minute video in which I explained the difference between the world that works and the world that fails, using the example of FedEx and UPS versus the bureaucracy.

The UPS and FedEx systems are so capable and so efficient that they can track, in real time, millions of packages as they move across the country. UPS locates fifteen million packages a day; FedEx eight million — while they are moving. In contrast, the federal bureaucracy can’t locate between ten and twenty million people in this country illegally. Perhaps, I said in the video, the federal government should send each of these people a package by FedEx or UPS.

Besides writing books, Gingrich also keeps busy with his consulting firm, The Gingrich Group, and holds a great variety of board memberships and organizational fellowships. (He has also reportedly flirted with the idea of running for president). In Georgia, he is actively trying out new ideas in education as the architect of the “Learn & Earn” initiative, a program that has received private funding from a group led by Jackie Cushman, Gingrich’s daughter, and involves paying low-scoring high school students for better grades and time spent in study hall. (Sound familiar?)

Despite his negative feelings about the Times, Gingrich has agreed to field questions from the readers of this blog, so fire away in the comments section below. As always, we’ll post his answers in a few days’ time. Thanks in advance to Newt, and to all of you for participating.