There has been a lot of hand-wringing about whether or not the U.S. economy is currently in a recession. This morning’s data will, I think, lead to a near-unanimous view that the U.S. economy is in a recession. Not only was employment growth in February negative, but the B.L.S. also tells us that the previous two months were worse than originally thought. Over the past three months, non-farm payrolls fell at an annualized rate of about 0.1 percent.

As the chart below shows, in virtually every instance in which payrolls fell over a 3-month period, the NBER business cycle dating committee declared the U.S. economy to be in recession. Indeed, the only exceptions to this rule occurred over 50 years ago. 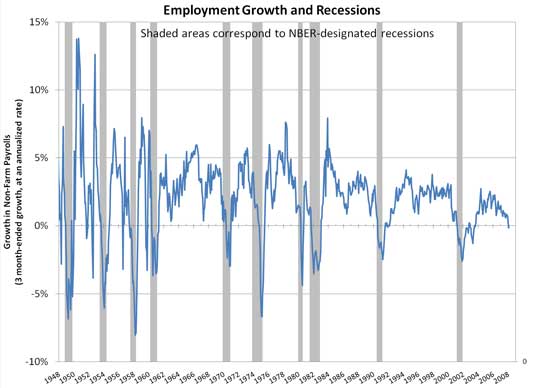 1) The only thing to save us now: these are preliminary data, and a big upward revision could give a different view. But given the run of other recent economic data, it seems pretty darn clear that the macroeconomy is currently pretty grim.

2) What the politicos will say: given where we are in the political cycle, expect some commentators to point instead to the survey-based measure of the labor market. These data are based on a survey of workers rather than firms, and tend to yield noisier estimates. And when numbers can jump around a lot, it gives plenty of scope for political operatives to choose the specific numbers that support the particular story they are trying to tell. Even so, there’s not a lot of good news in the survey data.

3) What many macroeconomists will be pondering: does this second recent recession challenge the view that we are in the midst of a “great moderation,” in which the business cycle has been tamed?

4) The chances of a recession, according to Intrade.com, have risen to somewhere around 60 percent. But these traders are predicting the chances of two consecutive quarters of negative GDP growth, rather than the decisions of the NBER business cycle dating committee. The latter seems much more likely than the former (although both are likely).

Further commentary: Paul Krugman writes, “It has begun“; Brad DeLong warns against “a natural human tendency to overreact to what is, after all, only a marginal data point,” but goes on to say that “it is time for words like `alarm’ and `grave concern,'” a message consistent with this roundup of other commentary.