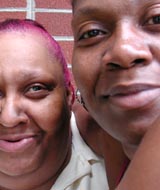 Dorothy (right) and her daughter Do-Do.

Last week Sudhir Venkatesh solicited your questions for Mindy and Dorothy, two of his contacts in the high-end (and low-end) sex worker world.

Mindy and Dorothy also had a pop quiz for Freakonomics readers — which you answered enthusiastically (though not all of you passed).

Thanks to Mindy and Dorothy for their generosity and to all of you for your good questions and guesses.

Mindy and Dorothy provide some responses below.

But first … the pop quiz.

1. What was the most common lawyer fantasy/role play?

A: Lawyers have one common fantasy, according to high-end sex workers: they want their lady-friend to play the role of “opposing counsel,” by visiting them in the hotel room to strike a plea bargain. I’ll leave the rest to the imagination.

2. What’s the best way to keep the john around for a long time?

A: Dorothy says that “the best” sex workers will try to persuade their clients to discuss their marriages openly:

See, if you can start providing that kind of help, then the man thinks you’re not trying to hurt him, and he’ll come back for more. He’ll start being one of your regulars, and there’s nothing better than a man who keeps on paying!

On to the queries:

Q: There were several questions about hiding income from the I.R.S. and planning for the future. Mindy offered this reply:

MINDY: Most of us can’t make investments — we were never trained. We really operate in a world of cash, and we don’t tend to think about the future. But, then again, I would say most people probably aren’t so good at financial planning.

I don’t report my income. But sex workers will often form a business — some will style hair, others will do some kind of consulting — in order to start “cleaning” their money.

A big problem is that (if you don’t start a business or work part-time), when you try to apply for a job, you have this huge part of your life that’s empty. But that’s easy: you tell the employer you had kids. They never ask another question after that.

Q: What are your thoughts on legalization?

DOROTHY: I think legalization is really bad for the women because they will just get exploited. They’ll get paid a lot less and be forced to do a lot more.

I don’t condone prostitution, but I do understand survival.

Women sell their bodies for survival — I don’t care how much money they make. You don’t want to make that a permanent thing.

Q: How do you deal with cops?

DOROTHY: If you want to stay in the game, you better keep a police man happy. You always give a freebie now and then, because most women get caught now and then, especially if you’re on the streets. And you always want to tell him he’s the biggest man you’ve ever seen. Men ain’t that hard to figure out.

MINDY: Every sex parlor or escort service I’ve ever known has had cops who know what’s going on. I’m not saying that cops get laid, but they do know the clientelle.

Its simple: you keep the police in the know, because you never want to surprise your local officers. I’m not an expert on policing, but it seems that police don’t like surprises.

Q: How difficult is it to transport money at the high end of the sex work market?

MINDY: The women who make more than $5,000 per visit are the ones who have this problem. It’s really not common because most women don’t actually make that much money — the strip club, the manager, or the escort service takes most of their paychecks.

That’s what happened to the girl they called “Kristen” (from the Spitzer affair). I recommend that women always hold a part-time job because, if you have a pay check, you have a legitimate bank account. Then it’s pretty easy to hide your money.

Q: Is there much mobility from low to high-end sex work?

DOROTHY: I’ve seen a lot of women get off the streets and make a lot more money. They end up doing a dating service, or working at a hotel bar, or maybe they go place an ad on the internet. But most of these women make about $30,000 if they get really successful. They don’t make a lot more than that because they have a lot of expenses and they usually have children, rent, and things like that. They can’t keep a full-time job doing anything else while they are selling themselves.

Once in a while you find somebody who meets a rich man — or maybe two or three rich men — and then they hit the jackpot! These men start liking them, and then they let their friends know, and on and on. That’s how you can start earning a lot in the game.

Q: If men pay by the hour, they would want to consume as many acts per hour as possible. How do sex workers feel about this?

MINDY: I’m trying to be delicate with my answer: this usually doesn’t happen.

DOROTHY: Is he kidding?

Q: Mindy, why did you choose a nursing career?

MINDY: A lot of people probably won’t believe this, but much of our work is about therapy. These men who paid me thousands of dollars control their worlds. Everyone listens to them. And, at the same time, they are incredibly insecure people.

Every man I’ve had as a regular client went through a period of several months where he just cried — and I still got paid. I pursued nursing because I realized I wanted to relieve people’s anxieties in a more legitimate way.