Besmirching Ourselves Online: A Q&A With the Author of The Future of Reputation 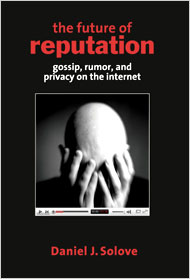 Daniel Solove is amazed by what people will divulge about themselves (and others) online — usually unaware of consequences which can range from stardom to job loss.

But in his recent book The Future of Reputation, Solove, an associate professor of law at George Washington University, explains why even someone with virtually no online footprint can suffer a similar fate as Little Fatty (see below) or The Washingtonienne‘s boyfriend.

He proposes a combination of litigation and social nudges to develop and define online privacy.

Solove has agreed to answer our questions about his book.

Q: In your book you point out that technologies change but human nature stays the same. What does this mean for our online reputations? 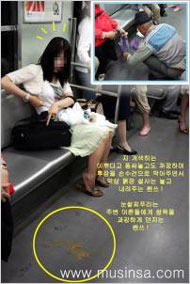 A: For the first time in history, anybody can publish information to a worldwide audience; in the past, only those with access to mainstream media could do so.

The students currently in high school and college — what I call Generation Google — will have to live with a series of information fragments about their personal lives.

In college, students often experiment as they strive to develop their own identities; they often do silly things.

One example is streaking — many college students do it, and it’s almost a rite of passage at some college campuses. In the past, such things were forgotten. But now, it’s so easy to capture everything in a photo or on video.

The gossip that pervades college campuses, high schools, and many other settings doesn’t fade into obscurity — it lives on. Gone are the days of innocent experimentation, of being foolhardy without having to suffer permanent regret.

Q: What percentage of people with an online presence don’t grasp the consequences of the information they are putting out there?

A: A lot. I constantly see blogs and social networking websites with people spilling out a torrent of incredibly sensitive information.

What happens as a result?

When people write on their computers, they often do so alone in their rooms. It’s hard to imagine that when you post something on your blog, it might be exposed to a worldwide audience.

Contrast that with speaking before a large crowded auditorium.

When people can’t see any audience, the visual cues that might inhibit them are missing — they might disclose more on their blog than they would in the auditorium — and the consequences (embarrassment, job opportunities lost, people constantly asking them about the things they read about online) might not happen until later.

Q: My mother boasts that she has virtually no online footprint — she doesn’t even have an email account. Is her online reputation still at risk?

A parent who has no online presence may have a child who is writing extensively about them on a social network website or blog. For example, if you had named your mother in this Q&A, there would now be some information about her online.

Another example is the kid in China who was surfing the Web one day and discovered that somebody had taken his photo and placed it online — and that thousands of people were inserting him into movie posters and other scenes.

They called him “Little Fatty” because he was pudgy. Imagine his surprise at discovering that his face was on thousands of websites.

Q: Would the story of the Dog Poop Girl — a woman who didn’t clean up after her dog after it defecated on a subway in South Korea — have happened the same way in the U.S.?

A: Yes. Somebody snapped her photo and placed it online, she was identified, and a vicious online shaming campaign ensued, resulting in harassment — and it spread worldwide.

This could easily have happened in the United States. Shaming is something that has occurred since ancient times in nearly all societies.

A: Shaming in the physical world often occurs in mild, fleeting ways. If a person does something rude, people nearby might say something; they might glare.

On the Internet, however, shaming can become a digital scarlet letter that can be affixed to a person’s identity for life. Wherever that person might go, their shameful acts will readily pull up in a Google search.

Moreover, in the physical world, there are typically only a limited number of people who are nearby to witness the event and engage in the shaming. Online, thousands — sometimes tens or hundreds of thousands — can join in the posse. The ability to spread information quickly allows a mob to erupt — something that is more difficult to achieve off-line.

Mobs don’t behave thoughtfully and rationally; they aren’t calm and measured and fair. Shaming campaigns often devolve into harassment and threats and get very ugly, as I describe in some cases in the book.

A: One of the more popular ones is Don’tDateHimGirl.com, a website where women post complaints about men they’ve dated.

Q: Have you ever taken part in social “shaming” — online or in real life?

A: Not online shaming, but off-line — there were times where I said something to somebody who butted in line, but I’ve never dialed a “How’s My Driving?” number.

Q: In your book you mention a tipping point where online gossip spills over into an epidemic — where is that point and how do we prevent ourselves from getting there?

A: The key is to find information quickly and nip it in the bud — the best way to stop any epidemic.

If you find information about yourself online that is libelous or invasive of privacy, you should contact the person who put it up and request it be taken down. In many cases … this will solve the problem.

The danger is that at any moment, gossip can go viral — it can become very popular and be discussed on thousands of sites (and read by millions of people). Once this happens, it’s hard to fix the damage.

But there isn’t an easy, elegant way to nudge bloggers — after all, there are over 50 million blogs!

Q: How do we as a society incentivize bloggers to take more care in shielding identities?

A: If the law were more protective of privacy, the message might be spread that if you don’t blog responsibly, then you might face a lawsuit.

At best, though, the law can merely push society a bit in this direction. Millions of lawsuits aren’t practical – and they certainly aren’t desirable.

The goal is for a set of norms to develop about responsible blogging — for a kind of ethical code to emerge.

Q: What issues arise from the law’s role in privacy protection?

The law overprotects speech in certain circumstances. One example of law that needs to be changed is Section 230 of the Communications Decency Act.

Section 230 does not establish a good balance between protecting reputation and preserving free speech.

As interpreted by the courts, it discourages sites from taking responsibility for the comments posted on them and has been turned into a blanket immunity that allows sites to leave up content that they know is defamatory or invasive of privacy.

It’s allowed websites like JuicyCampus.com, which facilitate the spread of gossip and rumor on college campuses, to flourish without consequences.

To adequately protect privacy, the law must develop more modern and nuanced understandings of privacy. Too often, the law is hindered by antiquated notions of privacy, which prevent it from being effective.

Q: You say the design choices of websites and their default settings have an enormous impact on privacy. Can you suggest a way a current website might be changed to improve privacy along these lines?

A: Many social network websites are set up with a default setting that makes information fully available to the public. This is the easiest setting, and many people just go with the default.

Social network websites are also not very nuanced about how they categorize relationships — the world can’t easily be divided into friends and not-friends.

If sites were structured to set the defaults toward making disclosure more restricted, it would help matters quite a bit — and make people think before exposing information to the entire world.

Q: So have you ever regretted putting something about yourself online?

A: Unfortunately (for you and your readers — fortunately for me), I don’t have information online that I regret.

When I was in high school and college, I used an Apple IIe computer, with 64K of R.A.M. E-mail was relatively new, and I used it occasionally. There were no social network websites, no blogs.

Now, I’m totally addicted to e-mail and the Internet — if I can’t check my e-mail and surf the Web for a few hours, I start to have withdrawal symptoms.

I’m fairly certain that if Web 2.0 were around when I was in high school and college, I’d have a blog and social network website.

Would I have put up regrettable pieces of information? I’m not sure — I was never an exhibitionist type of person, so I’ve never felt the need to display my private life before the public — and I was a fairly boring kid.