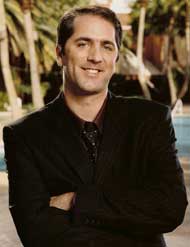 Phil Gordon has made more than a few appearances on this blog, most of them concerning his skills as a jack-of-all-poker-trades: he’s a champion player, author, teacher, ringleader, analyst, and entrepreneur.

He hasn’t always applied his smarts to cards: a former computer programmer, he started out working at Lockheed Missiles and Space Company on artificial intelligence projects; he also sold a tech startup for a lot of money. He is so smart, or maybe it’s just that he’s so damn tall, that he persuaded Levitt and me to invest in a new startup he’s running. (This is what is known as full disclosure.)

He also likes Rock-Paper-Scissors a lot, and also fighting cancer.

Most important, he has agreed to take your questions here at Freakonomics.com, so fire away. As with past Q&A’s, we’ll let the questioning run for a couple of days and then publish his answers a few days later. Many thanks to Phil and to all of you for your kind, considerate, and heartfelt questions. And the inevitably snarky ones too.