Conservatives Are Happier Than Liberals. Discuss.

Arthur Brooks, the Louis A. Bantle Professor at Syracuse University’s Maxwell School of Public Affairs and a visiting scholar at the American Enterprise Institute, made his first appearance on this blog when he found that religious conservatives are more philanthropic than secular liberals. He has appeared a few more times since then. He has just published a new book, Gross National Happiness, and has agreed to blog here periodically on the subject. We are very pleased to have him.

Readers of this blog have been seeing quite a bit lately on the subject of happiness, which has become a fairly popular research topic for economists of late. Justin Wolfers has been publishing an elegant series of posts about whether money buys happiness.

But what about politics? Who’s happier, on average — conservatives or liberals? This is a major theme in my new book, and I’m going to post on this question here for a few weeks.

Several years ago I would have told you that liberals have the happiness edge. Regardless of our personal political views, when most academics like me think of an “average conservative,” I have found we tend to conjure up an image of something like the American Gothic: grim, puritanical, and humorless.

Until relatively recently it seemed that the evidence more or less backed up this impression. For example, in one study in the Journal of Research in Personality, Berkeley researchers traced the political ideology and world view of people in their early twenties back to the personalities they had exhibited as toddlers — recorded by their preschool two decades earlier.

The “liberal” young men had these principal traits as babies: resourcefulness in initiating activities, independence and autonomy, and pride in accomplishments. Liberal young women had similarly happy characteristics. In contrast, as babies the conservatives had been easily offended, immobilized under stress, brooding and worried, and suspicious of others. Conservative young women had cried the most easily.

There are a few reasons one might take issue with the study’s conclusions:

All of the study participants, for instance, lived in the San Francisco Bay Area (which by itself would make a conservative of any age emotionally rigid and prone to weeping). But this study reinforced the stereotype that conservatives are naturally less happy than liberals.

What the actual data on self-assessed happiness show, however, is that conservatives have a substantial happiness edge, at least by the time they grow up.

For three decades, the General Social Survey has asked a nationwide sample of adults, “Taken all together, how happy would you say you are these days? Would you say that you are very happy, pretty happy, or not too happy?” Here is a representative sample of the results:

Adults on the political right are only half as likely as those on the left to say, “At times, I think I am no good at all.” They are also less likely to say they are dissatisfied with themselves, that they are inclined to feel like a failure, or to be pessimistic about their futures.

It doesn’t matter who holds political power. The happiness gap between conservatives and liberals has persisted for at least 30 years. Indeed, the difference was greater some years under Bill Clinton than it was under George W. Bush. Democrats may very well win the presidency in 2008, and no doubt many liberals will enjoy seeing conservatives grieving out about that — but the data say that conservatives will still be happier people than liberals. 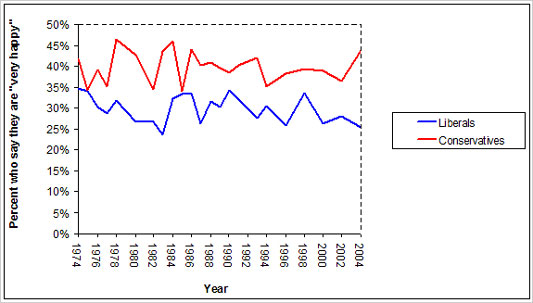 Lots of other data sources tell the same story as the G.S.S. Furthermore, there are many related findings, such as the fact that gun owners are happier than non-gun-owners, on average.

Now, before any conservatives get out their big foam fingers and liberals flame me to within an inch of my life, let me stress what these data are not saying.

The happiness differences here do not indicate that conservatives are better than liberals, righter than liberals, or even that they deserve to be happier. In fact, a major criticism of conservatives by liberals is that they have no right to be so happy-that they really should feel worse because they are misguided, or even malevolent. I’m not claiming here that the right wing merits their relative happiness. You can be the judge of that.

The differences here mask all sorts of variations between different flavors of conservatives and liberals. Are right-wing libertarians as happy as religious conservatives? Are economic lefties more or less depressed than social liberals? We don’t know, because the data are too limited to get into that kind of detail.

In a post next week, I’ll dig into why conservatives have the happiness edge, hypotheses about world view and psychological differences, as well as some important lifestyle distinctions between right and left. After that, I’ll write about the happiness differences between people with moderate and extreme political views.

In the mean time, I welcome your thoughts.