Michael and the $70 Million Problem (Redux)

Michael and I looked over the 500 plus comments and suggestions that were generously offered regarding his upcoming dilemma:

How should I give away $70 million?

We were joined by his sister, Cathy, who also has a “small sum of money” (her words) that she needs to donate in the coming decade. Apparently, she will have to give away “only” about $45 million.

The three of us were overwhelmed at the number of thoughtful responses. Michael and Cathy’s specific reactions are presented below. We all agreed that the discussion should be continued.

Most of their friends won’t receive their trust-related disbursement for a few years, so I offered to bring together other privileged twenty- and thirty-somethings who might be looking to give away large sums of money to charity. If any aristocrats in the blogosphere would like to join me for a discussion, I invite you to e-mail me and come to N.Y.C. Don’t worry, I’ll pick up the tab for coffee and lunch. 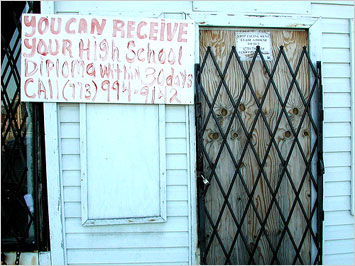 I also shared with them the suggestions of “The Thugz,” the group of ex-street hustlers/gang members with whom I watched season five of The Wire. Shine and the others laughed when I asked them, “How can Michael use his charitable dollars most effectively.” They all wished they had this problem. Their replies echoed some of their earlier thoughts on the state of modern society:

SHINE: Like we always tell you, Sudhir — a man wakes up in the morning in most poor places, and his first problem is, “What am I going to eat?” He has to feed his family. Lots of people don’t realize that if you can’t eat, your whole day gets messed up.

I can’t tell you how many n– -s do stupid shit because they couldn’t get no food. Lot of people rob and steal to put some food in their belly. Make sure people got food. A man stops feeling angry against the world when his belly is full. That’s what I’d tell the brother to do with his money. And, make sure the older folks got food, not just the kids.

ORLANDO: Get them guns off the street. And, I don’t mean just around here (New York City). I mean go where them white folks live — New Jersey, and places like that.

If brothers want to fight, they should do like they did in the old days: with their hands. You get guns off the street, you’ll get rid of a lot of problems. I agree with Shine, people have to eat. But, there’s always going to be angry folks. The problem is when they start shooting each other.

TONY-T: The suburbs. My cousin grew up there. Went to college. Ain’t learned a thing. Tell Michael he should pay these kids to go do something so they can really learn what life is like.

Instead of going to college, pay them to go fix a house, or hang out with hustlers who struggle out here. I’ve been to the suburbs. You got some seriously ignorant people out there who need help.

KOOl-J: You want the truth? I’d make it a law that if people get money when their parents die, they have to spend ten years doing some kind of free work. You know, like what I had to do after jail: clean up the streets, paint buildings.

I sell a lot of dope to the rich kids, so I know what they’re like. They got a lot of time, and they don’t do nothing! That’s a crime. Make it so they can’t sit around all day, snorting coke. If they want their money, they have to get up off their a–. Like Michael is doing.

Michael and Cathy both admitted that their peers had relatively little pressure to make a “positive societal contribution.”

You grow up like I did, and it’s all so easy,” said Michael. “And, your parents really don’t think a lot about what you need. I mean, every time I had a problem, my mom wrote a check. My dad was never around.

“Right, and when Dad wasn’t around, his secretary wrote us the checks!” laughed Cathy.

So, I spent six years getting high, doing coke and feeling horrible about myself. Kool-J is absolutely right. There’s no one who teaches us what our responsibility is. And, now, I have to give this money away. But, how?! I really struggle to figure out where to begin.

I mentioned several options, including giving money to an established foundation and making a career out of philanthropy, as opposed to simply writing checks. Or, why don’t they draw on experts who help the rich give their money away?

Honestly, when you work with consultants, the first thing they do is make sure you don’t see what is really going on. If I have to see another brochure about a kid who beat the odds, or attend another party where my friends get applauded … It’s sickening, I don’t want consultants to protect me from the outside world. My parents already accomplished that.

Cathy continued by turning the lens inward. She pointed to GiveWell, an organization that she felt understood one of the central problems for her generation.

I’d like to help other people I grew up with first. I know that sounds crazy. If I tell you I’ve got hardships, you’ll laugh, right? I mean who really believes we have a hard life? The problem is that we have resources, but no direction. My friends like this group called GiveWell because they sort of get how we think, they understand where we are coming from. I would like to get to my friends just after they graduate, right when they start having problems — drugs, depression, getting bored. That’s the time I think I could help them. But, I still don’t know how, exactly, to do that.

“I know what I don’t want to do,” shouted Michael, spilling his coffee on his lap. And, at this point, the conversation turned to the comments of Freakonomics.com readers:

I will never act like I know better how people should spend their money. The one thing I can’t stand is when my friends give away money and then write a report card. At some point, I think you just have to trust that the money is doing good.

My friends give away millions, and all they do is b–ch and moan that they didn’t get the results they wanted. What did they expect? To end poverty overnight? They all want this oversight, but frankly it’s all armchair complaining.

Michael liked the suggestions regarding assistance to hospitals and medical clinics. He felt passionate about making sure people had access to good medical care: “I agree (with johnjac, #60). People shouldn’t die because they couldn’t get to a hospital.”

He wanted to combine health-related philanthropy with an approach to solving hunger in America.

I think that Debra (comment #380) is thinking like I am. I’d like to create a place where you come in, get a meal, get checked out, and get medical care. One stop. I’d also like to make sure we end hunger in this country. I think Shine is right: you can’t function if you’re hungry.

But, he quickly made the point that U.S. needs deserve priority over international charity — a point contested with great passion by many Freakonomics.com readers.

I can’t believe all these people think we should first give outside America! That’s exactly the problem.

I go to the Hamptons, and they have these stupid fund raisers for things going on that are thousands of miles away. And, then you go back to 5th Ave (on Manhattan’s Upper East Side), and you tell your doorman to make sure no homeless people ask you for money on the block. It’s sick.

Michael suggested that the government force rich, new philanthropists to give only in their own town or city. “Give locally. That way you’ll be forced to see the pain close up. And, you’ll see you can’t fix it overnight.”

“So, you’ll be giving to whom exactly? The poor child at 84th and Park?” I said with just a hint of sarcasm.

“No, but maybe I could give to their maid or nanny,” he quickly retorted. “She is getting $5 per hour, and is probably getting treated like crap!”

A lot of people (on the blog) talked up the idea that we should be social “entrepreneurs.” I disagree. I don’t like it when people like me give money away to get a return on their investment. That’s disgusting. I didn’t do anything to get rich, so why should I deserve to get anything back? And, I think that the micro-lending people also do the same thing. Give a dollar, get back 30 cents. Wow, that’s not charity, that’s selfish.

Michael felt similarly, but moved the conversation in a different direction — along the lines suggested by comment #299.

I like the idea of having people do things like building roads, or teaching the poor. But, I don’t like the Teach for America program. Two years, and then you go and work for Merrill, feeling good that at least you tried to save the world.

For God sakes, do it for longer. And, I think that people should do it differently. Maybe they have to teach for a year, go to work at Merrill, and then come back after five years. Then go back to being an I-banker, and then teach again. This way, you have to reconnect, and feel the pain of the world around you.

Michael kept saying “feel the pain” throughout the conversation, so I asked him what his next steps would be to get out of his insular world.

He said that he’d like to take a car and drive around the country and talk to people for a year. “I know I would prioritize hunger and hospitals and things like that. But, maybe I should get to know what’s out there. For a year, I’d like to feel my way around.”