The Economics of Happiness, Part 5: Will Raising the Incomes of All Raise the Happiness of All?

In a famous 1995 paper, Richard Easterlin asked: “Will raising the incomes of all increase the happiness of all?” His analysis involved studying the evolution of happiness through time in Japan, the U.S. and Europe. His answer? “No.”

Betsey Stevenson and I recently returned to examining the evolution of happiness in these three important regions, and we conclude that the evidence is not so clear cut.

First, Europe. The Eurobarometer Survey allows us to track average levels of life satisfaction since 1973, in the same nine nations that Easterlin analyzed. The relationship between happiness and G.D.P. in these countries is shown below:

1) In eight of these nine nations, satisfaction grew as G.D.P. grew, and in six of these cases, the relationship is statistically significant.

2) But there are some pretty interesting exceptions. For instance, why has happiness fallen in Belgium, even as G.D.P. has grown? And why did happiness take so long to grow in Ireland, even as the “Irish miracle” led to tremendous economic growth?

3) While the pattern varies across countries, in most cases, the time series data suggest a satisfaction-G.D.P. gradient of about 0.2, with some larger, and some smaller.

4) This pattern of satisfaction growing with G.D.P. is less clearly evident if one analyzes only the early data (solid dots). This partly explains how we are able to make stronger inferences than earlier researchers.

5) In subsequent years, this survey (and indeed, Europe) has expanded to include more countries. We have analyzed this broader sample of countries, finding roughly similar conclusions.

Now, let’s turn to Japan, which is arguably the most interesting case study, because it went from a quite poor country after the war, to become one of the world’s economic powerhouses by the late 1980’s. Moreover, Japan is unusual because the government has collected life satisfaction data since 1958. Previous researchers had interpreted those data as suggesting that this incredible economic growth had yielded no gains in happiness.

Puzzled by this finding, we had the Japanese survey questions re-translated. It turns out that there was not one continuous question yielding a flat trend in well-being, but instead four separate questions asked in four separate periods. And during each of the first three periods — when economic growth was rapid — it was matched by commensurate growth in life satisfaction. The fourth question began in 1992 and satisfaction declined as per capita economic growth was anemic (0.9 percent) and unemployment became a problem. 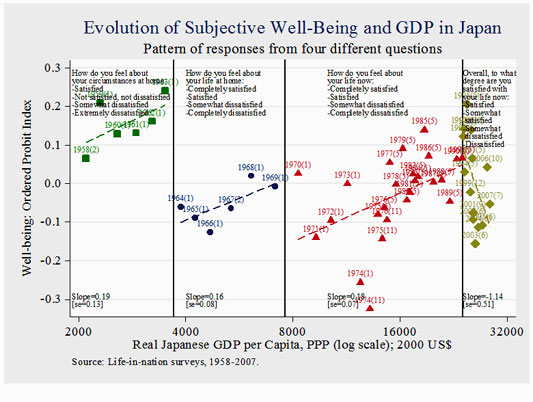 Looked at this way, the dramatic growth in Japanese G.D.P. from 1958 to 1991 was matched by rapid growth in life satisfaction. The decline in satisfaction since 1992 is both worrying, and worth much more study.

Finally, we turn to the United States. Happiness data from the General Social Survey show virtually no trend since 1972, despite G.D.P. having doubled over this period. We find this puzzling, and we really don’t have an airtight understanding of what is happening in the U.S. Equally the “happiness shortfall” isn’t that large — by 2006 perhaps another 8 percent of the population should be “very happy”, and the proportions “not too happy” or “fairly happy” should each be about 4 percent lower.

One possibility is that inequality may play a role.

Yesterday I showed that happiness seems to be related to the log of a person’s income level. If this is right, then average levels of happiness would rise with average log income, whereas our usual income numbers (shown in the second panel, below) focus on the log of average income.

Instead, the bottom panel shows rather anemic growth in average log income. Thus, given that the income gains over the past few decades went mostly to those who are well off, and given that these folks get somewhat less happiness per extra dollar, then perhaps it seems reasonable not to expect much of a rise in happiness. And indeed, average happiness for those at the top of the income distribution has grown through this period. 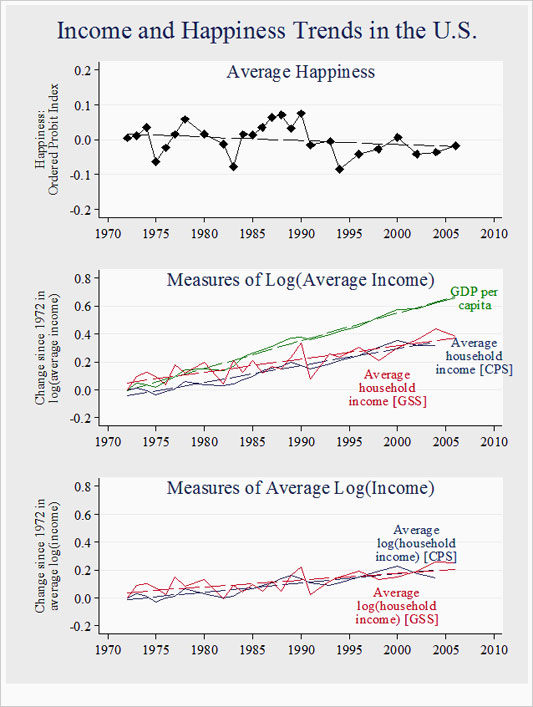 Our research paper contains a lot more about comparisons of happiness and income through time. The broader datasets follow the contours of the discussion above: the experience of some countries points strongly to a happiness-income link, there are definitely cases that point against it, and others leave you scratching your head.

Tomorrow, we’ll turn to asking in a bit more detail just what these happiness data are measuring.