What Would You Do With $70 Million?

This is the dilemma faced by Michael, a 31-year-old who will soon inherit a large sum of money.

For reasons that the truly wealthy will immediately understand, Michael has been advised to set up a foundation. “I have to donate about $70 million over the next decade,” he laughs. “Or maybe it’s $50 million. I can never remember.”

I occasionally advise young philanthropists, and so Michael asked me for suggestions. But, as an avid reader of this blog, he wanted me to ask the Thugz and you (the general readers). You may recall that I watched season 5 of The Wire with the Thugz a few months ago. Michael enjoyed my discussion with the ex gang members and he wondered what they would do with the money.

He also liked the irreverent, witty humor displayed by the readers of the blog.

I met Michael at Harvard, in the late 1990’s. He was part of a small group of twenty-somethings who came from very privileged social backgrounds.

They were “blue bloods” who fit the classic mold of the upper-class Northeast W.A.S.P.: educated in private schools, raised in Manhattan, summer homes in the Hamptons and French ski resorts, fitted with all the dressings of American aristocracy.

I spent a few years observing their maturation. It was a fascinating experience that I am hoping to write about in my next book. 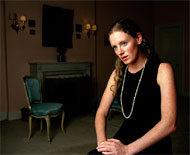 For those who are interested, this American tribe has been captured beautifully by Alix Smith, a photographer raised in this insular world. Her website reveals her peers in sharp, stylized portraits.

If he followed the traditional path, Michael would set up a charity, and then donate about 3 to 10 percent of his endowment each year. But, he says he wants to exercise his charity in a slightly different way:

1) I want to give it all away in ten years.
2) I want to give it away only in the U.S. — I can’t stand these people who give money overseas when we need it at home.
3) I won’t give a penny to schools. I think its unconscionable that Gates is paying for schools; that’s the government’s job.
4) I don’t want to give anything less than $1 million at a time. Meaning, no small grants.

I’m going to ask the Thugz for their comments, but what say you?