Why Are Kids So Crazy About Animals? 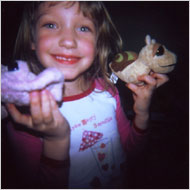 Yeah, zoos are fun. So are cartoons. And I certainly see the appeal of a teddy bear.

But why are kids so over-the-top crazy about animals? I am especially struck by the fact that some of the most popular cartoon and children’s-book animals are among the least appealing animals in real life. Mice, for instance. And pigs and rats and bears and fish.

Here’s what I read the other day in the class newsletter my daughter brought home from kindergarten:

Post Office Money Update: After a vote among all four K classes about how to spend this money, “Animals” received the most votes. (Other choices were Kids, Grown-Ups, and the Earth.) Please let us know if you are aware of any reputable organizations which are devoted to animals.

I wouldn’t expect kids to want to give any of their money to grown-ups. And while kids may be helping to drive awareness of climate change, “the Earth” is a pretty amorphous target.

But I have to say that I am constantly surprised by how devoted kids are to animals, even if that devotion doesn’t seem to last into adulthood for most of us. (See, for instance, the dearth of interest in animals in this philanthropy bleg.)

Can anyone explain it?

I have a few rough thoughts:

1. Animals are simply cute and cuddly — at least in the abstract, and in cartoons.

2. Animals seem vulnerable, and kids want to take care of them — or, conversely:

3. Animals seem vulnerable, and kids want to control them.