A Not-So-Cheap Way to Get Skinny 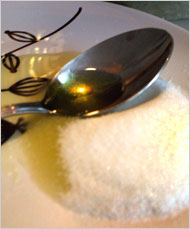 A couple of years back, we wrote about the very interesting research of Berkeley psychology professor Seth Roberts, whose self-experimentation included a weight-loss program that was incredibly simple, cheap, and seemingly effective.

Later, Seth turned his method into a book called The Shangri-La Diet. The diet is really a simple appetite-suppressing plan whereby you regularly ingest some sugar water or olive oil a few times a day, which blunts your hunger by tricking your body’s set point.

I don’t know whether the folks who developed the appetite suppressant called SLIM Shots read about Seth’s work, but their premise sure seems similar:

SLIM Shots is 100 percent natural — safe and suitable for everyone. SLIM Shots contains a patented formula of purified palm oil and oat oil and water — all naturally occurring but blended into a complex which helps you lose weight or maintain weight naturally.

Seth told me that he’d been approached by a California supplement maker who was interested in turning his diet idea into a diet product, but it didn’t go forward. Too bad. With SLIM Shots charging what looks like $30 or $40 for a month’s supply of little cups of oil and water, there seems to be a lot of money made in cheap diet fixes.