Emek Basker is an incredibly creative (and under-appreciated) industrial organization economist. She is also surely the leading Wal-Mart-ologist, and has been studying big box stores for several years.

Her most recent piece provides a very nice teaching example highlighting the importance of the income elasticity of demand; she also managed the perfectly accurate but cheeky turn of phrase that we all dream about sneaking into an academic paper:

In this note, I estimate the income elasticity of revenue for Wal-Mart and Target over the last ten years. Because some consumers are likely to view each discounter’s products as normal while others view them as inferior, the aggregate relationship could go either way and depends on the size of the two groups as well as on the magnitude of their elasticities of demand (positive and negative).

Oh, and in case you are wondering how Target and Wal-Mart are doing, here are their latest stock price movements: 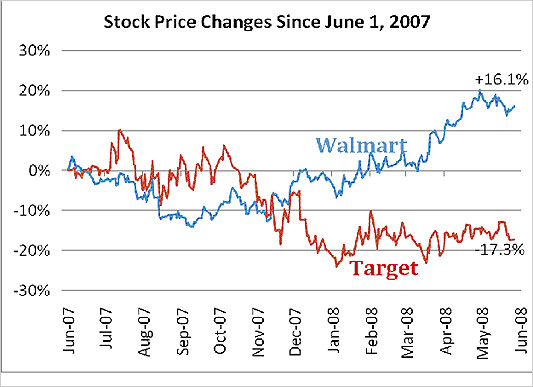 Given Basker’s estimates, it is probably no surprise that the current slowdown is good news for Wal-Mart, but bad news for Target.

It turns out that Basker’s findings are no surprise to Wal-Mart: In October 2007, CEO Lee Scott argued that “Our low prices and low-cost business model should give us an advantage over other retailers if things get more difficult for consumers.”

Her full paper is here.