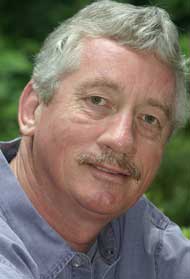 Frans de Waal is one of the world’s most prominent primatologists, known especially for having drawn parallels between the behavior of humans and non-human primates — from peacemaking to morality to culture.

His first book, Chimpanzee Politics, compared the schmoozing and scheming of chimps with the behavior of human politicians. (Newt Gingrich, who was then speaker of the House, recommended the book to all freshman Representatives.) He has since published a slew of books; his latest are Our Inner Ape and Primates & Philosophers. He has published hundreds of scientific articles in journals including Science, Nature, and Scientific American. He is also the editor or co-editor of nine scientific volumes.

De Waal is a professor in the psychology department of Emory University and director of the Living Links Center at the Yerkes National Primate Research Center; he is a member of the National Academy of Sciences as well as the Royal Dutch Academy of Sciences.

De Waal has generously agreed to field questions from Freakonomics readers, so bring him your best in the comments section below. (I for one would like to know whether prostitution is widely practiced by primates.)

As with past Q&A’s, his answers will be published here shortly.