Bring Your Questions for the Guinness Book of World Records Editor 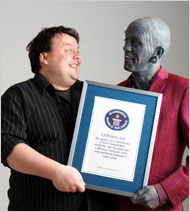 As a kid, not only did I love The Guinness Book of World Records but I was dead set on getting into the book myself. The record: world’s longest gum-wrapper chain.

I don’t remember how it got started, but somehow Judy Munson (the older sister of a close friend) and I started making the chain and before long, everyone in the whole school was giving us their gum wrappers. We carried the thing around in a tattered paper grocery bag. We were careful to unfurl it only rarely for measurement, since it was pretty fragile. But we knew there couldn’t have been a longer one in the world.

As it turned out, Guinness World Records wasn’t interested in our gum-wrapper chain. I can’t recall the details of their rejection, but it had something to do with the fact that our record was simply too trivial. Oh well. Still, I wouldn’t have traded the pursuit for anything. I’d encourage every kid in the world, in fact, to try to set some kind of world record, even if it never makes it into Guinness World Records.

This brings us to Craig Glenday, a Scot who has held many jobs, including food critic and medical photographer — but only his current occupation could spark this diary entry:

In the last month alone, I’ve overseen the printing of the 2009 book cover in Barcelona, got drunk with the world’s shortest man in Inner Mongolia, hung out with (the band) Fall Out Boy in Patagonia, and had tea with veteran screen villain Christopher Lee (most credited screen actor) in London. All this while trying to edit the book…

As editor-in-chief of the Guinness Book of World Records, Craig thinks it’s a fundamental part of humanity to push yourself ever further because, as he puts it, “Without knowing the extremities, it is impossible to know where you stand.”

Craig also holds his own Guinness World Record for the most radio interviews in 12 hours (53). The Book, meanwhile, is the best-selling copyrighted book in history, and the Gamer’s Edition recently made headlines by declaring Grand Theft Auto IV “the biggest entertainment release of all time.”

Over the years, safety concerns — and the threat of litigation — have led Guinness World Records to eliminate or rewrite some extreme records, including the consumption of liquor and beer, but not bicycles. Also eliminated: chain letters, which means that this one is almost surely a hoax.

Craig enthusiastically awaits your questions, so fire away. As with past Q&A’s, we’ll post his answers here in short time.