When it comes to creativity and storytelling, my sister Linda Jines got all the talent. She, for instance, is the genius who thought up the title “Freakonomics.”

In what we hope will be the first in a long line of guest blog posts, today she toasts my father on his 73rd birthday. 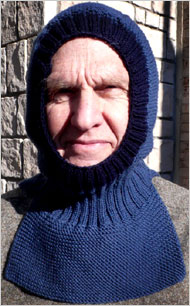 Levitt’s father in his balaclava.

My father is seventy-two years old. He is an inveterate outdoor jogger, running several miles a day year-round, even when the temperatures here in Minnesota don’t just dip below zero — they actually attach ankle weights, dive below zero, and stay there.

This winter is one of the coldest in memory — it’s jarring to turn on CNN and see a graphic referring to your home state as “The Nation’s Icebox” — so I decide to hand-knit my dad a wool balaclava to wear while he runs.

My husband and son and I meet my parents at an upscale Tex-Mex restaurant on a frigid Saturday afternoon in mid-January.

With a flourish, I present my dad with the hand-knitted balaclava, made of soft, heathery blue merino wool.

This floors me, because in my forty-five years of acquaintanceship with him, I’ve never known him to speak shyly. He’s a physician, and his gruff, no-nonsense manner has led to more than one comparison between him and television’s irascible Dr. House.

He turns the balaclava wonderingly in his hands and then puts it on. At first he settles into it warily, like it’s a spooky old diving helmet. But it’s only seconds before he settles into its corrugated softness, leaving it on as he picks up his menu.

“That’s Sir Michael,” my husband interrupts — because in his balaclava, my dad looks like some kind of doughty Spamalot super-fan.

Dad decides on tortilla soup and then says, “Wow! This thing is warm!” yanking off his unsettlingly Arthurian headwear to my mother’s relief. To be honest, people are pretty much staring.

“That’s what kept the soldiers warm at the Battle of Balaclava,” I tell him proudly. “The pattern is the real deal — it came out in 1919.”

“Real deal?” he splutters, slamming his hand on the serape-covered table. “Their heads couldn’t have been too warm, then, since the Battle of Balaclava was fought in 1854.”

It was foolish of me to volunteer a piece of military history, since in addition to jogging, my father’s other hobby is reading first-person accounts of war. After lunch, the five of us are heading to a nearby library to hear a local man read about serving as an infantry lieutenant in World War II.

The author begins the presentation humorously, describing how he bumbled his way into the army, a recent high school graduate, absolutely unsuited to lead. Toward the end of the hour, though, in a shaking voice and often through tears, he struggles through descriptions of frequent and terrible shelling, persistent diarrhea and constant cold, and the horror of coming up from the trenches after each round of bombing to discover which of his fellow soldiers had been disemboweled or rendered legless, armless, or faceless.

Dad loves this book. This book, unlike my time-tripping balaclava, is the real deal. He can’t wait to get to the front of the line to meet the author; while having his book signed, Dad discovers to his delight that the two men grew up just blocks away from each other, and that the author’s boyhood home had been part of my dad’s paper route.

As we exit the library, the dry, horrible cold assaults us instantly. I burrow as deeply as possible into my parka, glancing at Dad. He is smiling and humming as he walks, an indefatigable septuagenarian who still works six days a week as a gastroenterologist — the word “retirement” seemingly as foreign to him as the phrases “It’s natural to get a ‘B’ on a test sometimes,” or “What really matters is that you tried your hardest.”

All this talk of war and balaclavas triggers a memory of something my father taught me during frequent trivia cram sessions for the televised quiz-show matches I participated in as a high school senior. I remember his telling me that some wag had taken the phrase “A man can plan,” and anagrammed it into “Panama Canal.”

I look again at Dad, striding through the frigid parking lot, balaclava on his head, signed book tucked under his arm.

A man. A book. A balaclava. What does it all add up to?