Ebonya Washington, an economist at Yale, has a great paper that was just published in the American Economic Review called “Female Socialization: How Daughters Affect Their Legislator Fathers’ Voting on Women’s Issues.”

She looks at members in the House of Representatives and looks to see whether their voting patterns change. She provides interesting evidence that, “conditional on total number of children, each daughter increases a congress person’s propensity to vote liberally on reproductive rights issues.”

For example, looking at representatives with two children, she finds that N.O.W. (National Organization for Women) scores increase as the number of daughters increases: 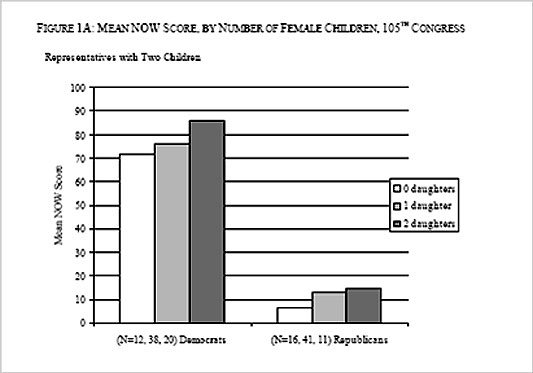 Her regressions suggest that the effect runs primarily through the impact of daughters on fathers. Representatives who are mothers apparently don’t need any more “female socialization.”

This article got me to thinking about whether having kids impacts the electability of candidates.

Akhil Amar taught me that George Washington was father of our country in part because he was not a father.

The founders were worried that a president might try to install his son as a successor. Because George and Martha had no children, this was not a risk.

Indeed, David McCullough says that Thomas Jefferson‘s supporters made a similar argument in the run up to the 1796 election against John Adams. Adams posed more of a dynastic risk because of the incredibly accomplished John Quincy — while Jefferson had no legitimate sons to illegitimately favor.

The question arises, however, whether having or not having kids impacts electability today.

I don’t think that dynastic risk is a large concern — but there are other possibilities. One of the wonderful things about the A.E.R.’s new data sharing policy is that it’s possible in just a few clicks to download Professor Washington’s data and answer some basic questions.

To begin, who has more kids — Democrats or Republicans? By a fairly large margin (2.70 vs. 2.16 average kids per member), the answer is Republicans.

But here’s a tougher question: Who has more kids — male or female members of the House?

There are lots of stories you could tell here. Professional women tend to have fewer kids than professional men (probably because a disproportionate burden of child rearing still falls upon them). But a counter hypothesis is that voters demand that women politicians have more kids (than they demand of male politicians).

Voters might demand that women politicians have more kids to prove that they are “real women” or that they will care about family issues. (To suggest that this is a possible voter preference is not to suggest that it is normatively attractive!) If the latter hypothesis is true, Chelsea Clinton‘s status as a single child may impose greater political costs on her mother than it did on her father.

Let me emphasize that these are just cross tabs and I’m not claiming anything close to causality here. But Professor Washington’s data at least begins a conversation about whether procreation impacts who is elected as well as how elected officials will vote.