The Politics of Happiness, Part 2

Arthur Brooks — who has appeared on this blog a few times — has just published a new book, Gross National Happiness. He has agreed to blog here periodically on this subject and we are very pleased to have him.

Lots of readers weighed in, offering explanations for these data patterns. Here were their most frequent explanations:

1. Conservatives and liberals have different lifestyles, particularly regarding religion and marriage, which explains why conservatives are happier.

2. Conservatives have a world-view that — right or wrong — lends itself to greater happiness.

3. Brooks is an untrustworthy fool.

While #3 might be meritorious, let’s leave it aside and just focus on explanation #1 here and #2 in the next post.

There is good evidence to back up demographic explanations for the happiness gap, and I have found in my research that they soak up about half the gap between left and right. Religion is arguably the most important of these characteristics.

Consider a couple of facts:

Religious people are a third more likely than secularists to say they are optimistic about the future. Secularists are nearly twice as likely as religious people to say, “I am inclined to feel I am a failure.” Big happiness differences persist between religious and secular folks even when we correct for income, education, race, sex, and age.

Now combine these with the familiar evidence on politics and religion:

According to the 2000 Social Capital Community Benchmark Survey, religious conservatives outnumber religious liberals in America by nearly four to one.

The American political left is getting more godless, while the right is turning ever-churchier. While 27 percent of “extremely liberal” American liberals attended religious services weekly in 1974, only 16 percent did so by 2004.

In contrast, the percentage of “extremely conservative” church-attending conservatives rose over the same period from 29 percent to 57 percent.

No surprise, then: religious practice explains a good portion of the left-right happiness gap. In fact, when we combine religion and politics, happiness differences explode: see the chart below. 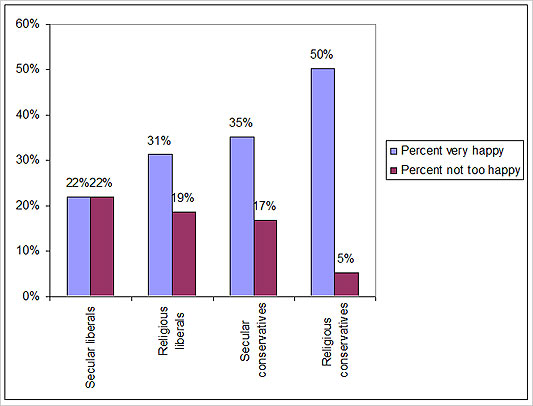 Even after accounting for religion (and a few other things, like marriage), however, a lot of the gap is still unexplained, and thus we also need to talk about world-view differences that might also affect happiness. My next post will dig into some of these differences.