The Politics of Happiness, Part 4

My last three posts have shown that conservatives are generally a lot happier than liberals; that religion is a major factor in this; and that worldview matters a lot as well.

But I have employed some minor sleight-of-hand in all this, lumping together “liberals” into a big group and “conservatives” into another. This is not the only way to separate people politically.

You probably have political opinions that are mostly conservative or liberal. But you might actually feel more at ease with moderates on the “other” side than you do with the hard core on your own side. In many ways, I believe there’s a more natural simpatico between moderates on the left and right than between moderate liberals and extreme leftists, or center-right folks and the fringiest right-wingers.

So here’s today’s question about politics and happiness: Who is happier — moderates, or people on the extremes?

I always thought it would have to be the moderates, hands down. After all, extremists actually advertise their misery with strident bumper stickers and signs like this one, which lots of people in Syracuse put in their yards in the run-up to the 2004 election, and some have left up since then. (This may help to explain Syracuse’s notoriously low property values.) 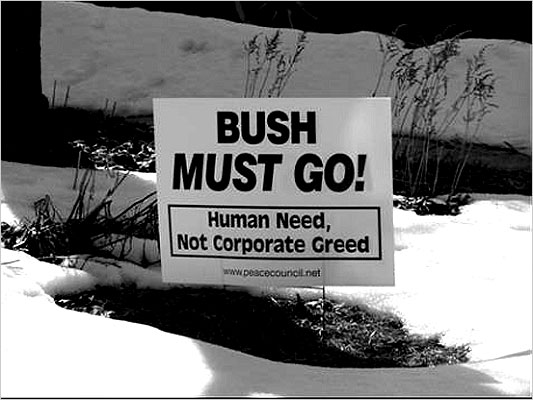 A rival sign to this one showed up before the 2004 election on the lawns of the approximately eight lonely conservatives in Syracuse. It said, “BUSH MUST STAY! America Protected, Not Terrorism Accepted.” Oh yeah, that’s clever.

The purpose of such signs is two-fold, it seems to me. First, it is to express righteous anger, and to remind like-minded people they shouldn’t be happy about the status quo. Second, it is to provoke those evil neighbors who don’t agree with the sign. In other words, it’s all about making everybody unhappy, right?

Maybe so, but the data suggest that the sign-bearers themselves aren’t so unhappy. In fact, people who classify their own opinions as “extreme” are significantly happier than people closer to the middle.

Contrary to what I always believed, George W. Bush‘s harshest critics — those who have felt the predations of the Bush administration to the very depths of their souls — are quite likely to be a great deal happier than more moderate liberals. And back in the Clinton years, all those cable pundits declaring the end of Western civilization because of that vile “blue dress” business? Happy as clams, it seems.

A happiness edge enjoyed by the extremes persists even if we control for the other relevant forces like income, education, race, religion, and so on. (One quick note on this, in response to some comments on my past posts. Some folks have noted that I often explain figures without discussing my multivariate regressions. Anybody interested in methodological details for any of my posts can find them in the endnotes and technical appendix to Gross National Happiness. Cross my heart. I just figured most Freakonomics blog readers wouldn’t thrill to the details of full-information, maximum-likelihood tobit models.) 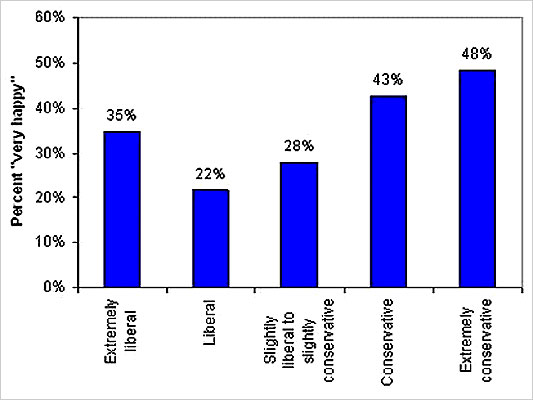 Why are the people with relatively extreme views so happy, compared with the rest of us? I’ll dig into that question in the next post. But here’s a hint: If you’ve been following this series, you know that being religious is strongly correlated with happiness. And religious fervor comes in many forms — some of them political.