The Politics of Happiness, Part 5

My last post showed that people with relatively extreme political views tend to be significantly happier than moderates.

I’ll admit I have a harder time relating to political zealotry than I do to political views that simply oppose my own. I have definite opinions — especially on issues like regulation, taxes, and freedom — but I’ve looked at a lot of data in my life and know that it’s simply not realistic to assume that I’m right on everything.

Furthermore, most of my friends and family disagree with me. (Frankly, I’m just grateful to live in a country where none of us gets locked up for voting or saying what we think about politics.)

So why are the zealots so happy? Many readers of my last post suggested that there is a tremendous amount of comfort — even happiness — in total certainty. I think this interpretation is right, and applies to fundamentalists of every stripe.

The troubling characteristic about fundamentalists is that those who don’t agree with them are not just wrong, but maybe even evil. Many religions and creeds encourage the dehumanization of apostates, after all.

Is it hyperbolic to compare political extremists to religious fundamentalists? Read the comments section on any political blog for about ten seconds, and judge for yourself. Better yet, let’s look at some data (you know you want to).

The American National Election Studies employs something called a “feeling thermometer.” This is a public opinion survey tool in which respondents are asked to express their personal feelings about people and issues on a 0 to 100 scale. A freezing score of zero is commonly interpreted as absolute loathing, while 100 means adoration. A score of 50 is “neutral.” A score of 20 or below is unusual, and usually reserved for people and things we despise.

Twenty-two percent of extremists gave people with the opposite viewpoint the absolute lowest score: zero. In one 2002 study, even Saddam Hussein got an average score of 8. 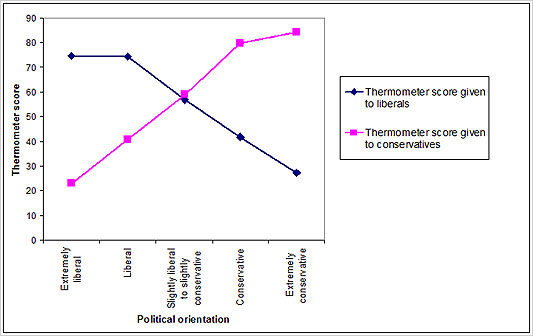 These thermometer scores are ratings of people, not ideas: An ice-cold score is equivalent to saying, “I dislike a certain class of people simply because of the views they hold.” No matter what they say, the data reveal that folks on the extremes harbor real antipathy for the lumpen masses they perceive to be on the other side of the debate.

To review, then: Extremists may be the happiest people on both the left and right. But as a general rule, they don’t like you — unless you agree with them. You might remember this just in case you hear a friend with hard-core political views going on and on about the importance of tolerance.

This post concludes this series on happiness, which can be found here in its entirety.