Does this symbolize a thriving art market, is it a happy exception, or is it even worth the price?

According to one estimate, the money paid for the painting could have paid for 20 minutes of America’s gasoline consumption. 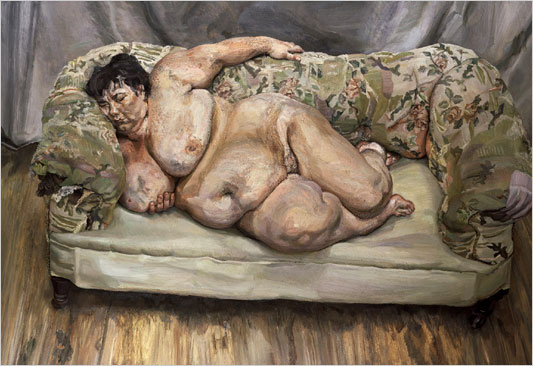 We asked Olav Velthuis, author of Talking Prices: Symbolic Meanings of Prices on the Market for Contemporary Art and David Galenson, University of Chicago professor of economics and author of Old Masters and Young Geniuses, about the sale and what it really means for the art world.

Q: Would this particular piece have sold for the same, less, or higher amount if Lucian Freud had died last year?

Velthuis: Difficult to say. From an economic perspective one would expect the price to rise, since the supply of works by the artist who died cannot be augmented anymore. But apparently you don’t have to be an economist to think that: many collectors do — so they decide to sell the work to profit from an expected rise in the price level once the artist dies.

The effect is, however, the opposite: the market gets flooded with work, so prices decrease. That happened, for instance, after Andy Warhol died in 1987.

Galenson: There is no simple, strong effect of an artist’s death on the value of his or her works. I believe this is because an artist’s death usually doesn’t have much impact on that artist’s influence on other artists.

Q: What might have most increased the value of the painting?

Velthuis: What may help in general is that Lucian Freud is not only a great painter, but also the grandson of Sigmund Freud, the psychoanalyst. He’s got a good biography, in other words, and some collectors may like that.

By the way, in the case of Bacon‘s triptych which Roman Abramovich — the Russian billionaire who bought Benefits Supervisor Sleeping — also bought, it definitely did not harm the price that it has been owned by a prestigious French family, the Moueix, who own the famous Bordeaux wine brand Chateau Pétrus.

Galenson: Larger paintings — like Benefits Supervisor — are usually more valuable than smaller ones. Paintings aren’t carpeting, so this isn’t because you’re paying by the square foot, but traditionally artists have set out to make more important statements in larger works. Some artists don’t follow this pattern, but I think Freud does; his larger paintings tend to be more ambitious than his smaller ones.

Q: How much does nudity and/or shock value affect the selling price and value of a painting?

Velthuis: Not much, at least not if you look at the most expensive paintings ever sold at auction. The list is still dominated by Vincent van Gogh and Pablo Picasso, whose oeuvres are (at least in our own days) not very shocking.

It is of course the case that quite a few contemporary artists have made their reputations (and high prices) making shocking works of art. Think of Piss Christ by Andres Serrano, Maurizio Cattelan‘s sculpture of the pope struck by a meteorite, or Jeff Koons‘s pornographic pictures of himself and his — then — Italian wife Cicciolina.

But apparently that does not suffice to make it on the list of the 10, 25, or 100 most expensive works ever. There are quite a few portraits of women on the list (Dora Maar by Picasso, Adele Bloch-Bauer by Klimt), but they all have their clothes on.

To make my point in a different way: the previous record for a work by a contemporary artist was a huge metal hanging heart, made by Jeff Koons (it sold for $23.6 million dollars in November last year). Some people may say that’s silly, but it’s definitely not shocking.

So Benefits Supervisor Sleeping is the exception to the rule. Apart from Freud, the only artist that comes close to making high prices with shocking, or at least anguishing works of art, is Francis Bacon. Interestingly, Abramovich last week also bought a triptych by Bacon for $86.3 million dollars.

Q: Would you hang Benefits Supervisor Sleeping in your living room?

Galenson: I would love to have Benefits Supervisor in my living room. Freud’s paintings are much more interesting in person than in reproduction; they are built up of layers of paint, over the course of dozens of sittings, and a lot of their interest comes from subtle visual effects involving the texture of the paint.

Freud only paints people he knows, and the portraits he makes of them have amazing psychological depth. They look very different at different times, in different light, and you learn more about them the more you look at them.

Q: What’s your best guess as to what the buyer’s main motivation was in purchasing Benefits Supervisor?

Velthuis: Abramovich is definitely not known as a big art connoisseur. He is known as a connoisseur of soccer (he happens to own the British club Chelsea and invested almost half a billion dollars in new soccer players to make it the best club of Europe) and of super yachts — he reportedly owns five of them, one of which, the Eclipse, cost $300 million dollars.

Here are two answers as to why he all of a sudden decided to spend this amount of money on art:

To start with, this amount means nothing to him. According to the last Forbes‘s list of richest people he has $23.5 billion dollars worth of assets.

So the painting took a tiny fraction of only 0.1 percent out of his wealth. That’s the same as when somebody whose net worth is $100 thousand dollars, buys a painting of $125 dollars. Not an amount to lay awake about, is it?

The other answer is that though he may be very wealthy, he may feel he does not have a lot of status, especially not among the global cultural elite. These acquisitions can be seen as an attempt to buy his way into this elite. The fact that his treasures are quite risky — and not very pleasing to the eye, at least — might help in accomplishing just that.

Q: Is art perceived as having more value if someone is willing to pay more for it or the reverse?

Velthuis: Both ways: if it has artistic or aesthetic, or cultural value, people are willing to pay for it. But, as I show in my book Talking Prices: Symbolic prices on the Market for Contemporary Art, a high price definitely makes people think it must be an important piece of art.

Empirical studies show, by the way, that if you take some indicator of cultural value (for instance, museum shows or pieces by art critics) it usually correlates very well with the selling price.

Galenson: Artistic importance causes high prices. Artists are always the first to recognize important innovations: when they respond by using these, others in the art world — critics, dealers, and collectors — eventually recognize this, and the price of the influential work rises.

Q: Is this record sale an indicator of the health of the modern art market or an exception? How should the art world take it?

Velthuis: To put it mildly, it is striking that art still fetches these record prices. I had expected the art market to collapse even before the financial crisis started.

Of course, what’s difficult about prices for art is that they have no “fundamental value,” unlike, for instance, real estate prices or stocks.

But the pace of price increases on the art market in the last three or four years is simply unsustainable. Pundits say it’s because “new world billionaires” like Abramovich have entered the market, but I don’t see how such a small number of new collectors in Russia, the Middle East, or China can or will support the present price level much longer.

Velthuis: For contemporary works of art on the primary market (that is: the gallery market where works of art are sold for the first time, out of the artist’s studio), the most striking factor is definitely size. Larger works by an artist are invariably priced higher than smaller works, no matter if the artist put more work into the smaller piece or if the smaller piece is, for one reason or another, easier to sell.

Galenson: The most surprising thing to most people about art prices may be the fact that there are consistent correlations between artists’ ages and the value of their work.

Conceptual innovators — e.g. Johns, Rauschenberg, or Warhol — make their greatest contributions early in their careers, and their early works are much more valuable than late ones.

Experimental innovators — e.g. Bourgeois, Bacon, or Freud – improve with age, and their late works are much more valuable than early ones. These age effects are very strong. I think they surprise people because art experts like to claim art markets are irrational — but they are wrong.

Q: What one thing would you change about the way modern art is valued?

Velthuis: What I find particularly annoying is that works of art that are perfectly reproducible, such as videos or photographs, are usually made in editions of 5 or 10. By doing this, the gallerists want to keep the prices up and maintain a sense of exclusivity.

This may not only be against the interest of the gallery and the artists (I call gallerists price maximizers rather than profit maximizers), it also goes against the ideology of the art world — at least of its more critical parts, which hold that art is or should be democratic. But by making works in limited editions, its elitist character is maintained.