I had a sobering moment a couple of years ago when I noticed that MSNBC’s recommendation engine predicted that I would enjoy stories about American Idol. It’s a guilty pleasure, but AI is one of the more normal things that I do with my 11-year-old daughter, Anna.

So my household is quite happy that (fellow Kansas City area native) David Cook won the other night. But Anna has been impatient each week to learn the results and has been logging into dialidol.com to get prior information on who is likely to be voted off the show.

For fans, DialIdol offers “free and safe software you can use to speed dial votes for your favorite contestants.” But what’s particularly cool is that while it is making these calls, it is also keeping track of the number of busy signals: Less popular contestants are less likely to have as many busy signals.

DialIdol predicts who will be voted off each week. They also let you know what the margin of error is in their prediction and give you nice graphics — with green, yellow, and red lights that indicate when a contest is too close to call — although it would be slightly cooler (as I’ve written with regard to political polls) if they gave actual probabilities of winning/losing.

After hearing Archuleta on the final night of performances, Simon said: “What we have witnessed is a knockout.” The morning before the winner was announced, Anna logged on and saw that DialIdol was predicting that David Cook was going to win by a large margin. Here’s what their prediction looked like: 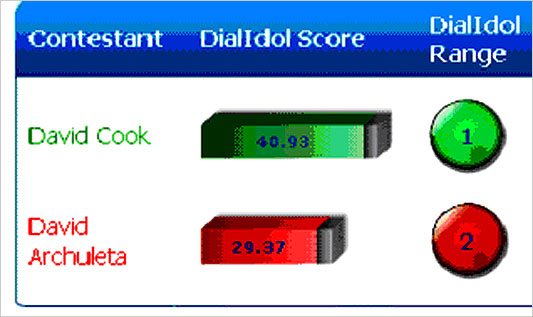 But there are many other ways to predict who would win. TiVo has experimented with using data from 20,000 random anonymous subscribers to find out when viewers fast-forward or re-watch particular contestants. Neat idea, but so far they have had a much lower success rate than DialIdol.

Instead of looking at phone and television behavior, you can also try to make predictions from Internet behavior. Apple might look at iTunes downloads of the contestant songs. Or you could use Google Trends to see which contestant name has been searched more often. David Cook rules by this method as well: 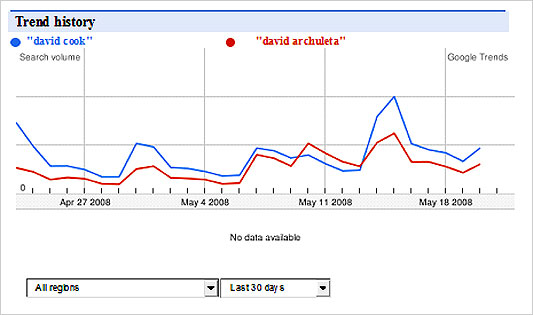 But somewhat surprisingly, Idol does not seem to be a context where the prediction markets have been very successful. It doesn’t seem like Intrade.com covered the show (why?). But realitymarkets.com showed David Archuleta to have a commanding lead even after DialIdol’s Cook prediction came in: 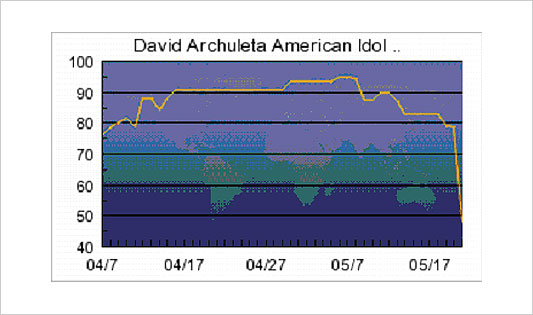 The prediction markets have access to the public information and should tend to do at least as well as DialIdol. But there may still be room for people to make money like Levitt did a couple of years back, simply by betting on the DialIdol sure things.

Given its track record of success, it’s bizarre to me that the vast majority of newspaper articles continue to ignore these predictions as they go about assessing who is likely to win.