Can a Two-Year-Old Grasp the Free Market? 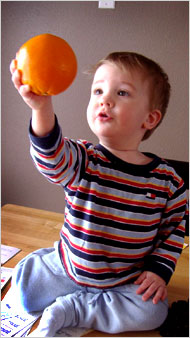 Photo by Steven Stewart of his son.

The essence of a free market is exchange — you and I raise our utility voluntarily by exchanging things with which we are endowed. I wonder how early people learn this idea in a free-market economy.

My five-year-old grandson had a Mylar helium-filled balloon, and his two-year-old brother had another one. They were fighting over them and my wife asked the older boy how he got his.

His answer: “We traded for it.” (There had been no fighting before — that trade was voluntary.)

The two-year-old then said, “I want to trade.” I believe the older boy understood the nature of exchange but the two-year-old did not — he just expressed his wishes (his demand). Do kids in non-market economies learn the idea of exchange at this age? I wonder.