Hormel Hits a Home Run, at Least in the Media

Sometimes a story is so irresistible that the media can’t stay away from it, even if it’s not much of a story. 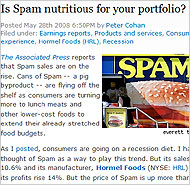 A. The U.S. is hit by a seeming economic downturn;
B. The costs of basic goods like fuel and food begin to rise;
C. And so consumers flock to a cheap, old-fashioned staple to sustain themselves.

Spam, of course, has its legacy. Remember Chuck Yeager‘s “Spam in a can” line from The Right Stuff? Remember this exhaustive and wonderful Spam FAQ? Remember when a computer plague came along that was so toxic that it was called Spam?

I recently noticed a spate of news articles, like this one, about how Spam, the affordable meat-in-a-can, is making a big comeback in light of higher food prices:

Spam’s maker, Hormel Foods Corp., reported last week that it saw strong sales of Spam in the second quarter, helping push up its profits 14 percent. According to sales information coming from Hormel, provided by The Nielsen Co., Spam sales were up 10.6 percent in the 12-week period ending May 3, compared to last year. In the last 24 weeks, sales were up nearly 9 percent.

That sounds impressive, doesn’t it — an increase of more than 10 percent? Even though, as the article points out, the price of Spam has risen slightly more than overall food inflation. Then comes this interesting bit:

The Austin, Minn.-based company, also known for the Jennie-O Turkey Store, has embarked on its first national advertising campaign for the 71-year-old brand in several years. They’ve credited the sales increase to that, along with new products like individually packaged “Spam Singles” slices. Also helping sales, executives said in an earnings conference call, was the fact that people looking to save money are skipping restaurant meals and eating more at home. … Hormel began its national advertising campaign, including print and television, for Spam in January. Neufeldt said such campaigns are planned in advance and it wasn’t tied to perceived weakness in the economy.

So we are asked to believe that a) more people are buying Spam because, according to Hormel, people are eating at home more to save money and that; b) they are turning to Spam because it is a good deal (even though, as pointed out above, its price has risen just as much as other foods). In other words, we’re being asked to believe that we are in a recession and that Spam has come to the rescue.

Whereas, in fact, the 10 percent increase in Spam may well be the result of nothing more than an ad campaign — which, considering that advertising ROI can be extremely weak, may mean that Hormel ends up having lost money on each additional can of Spam it sold.

The good news, however, is that seemingly every media outlet in America carried a story about the spike in Spam sales, which is pretty fantastic free advertising. So even if Hormel didn’t really hit a home run last quarter, maybe they will this quarter. Better yet, maybe that was Hormel’s strategy all along?

Whoever wrote the Hormel press release that produced all that coverage should definitely get a piece of the profits — and not just a few extra cases of Spam.