How Cops Really Want to Police 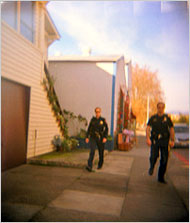 After writing my last Freakonomics post, I received a phone call from a police officer who began his career in Chicago.

Carl, the 54-year-old cop, started working in Chicago’s inner cities at the height of the crack epidemic. He transferred to the suburbs of Seattle for a lifestyle change — “I was tired of getting shot at,” he said matter-of-factly.

I had promised readers of this blog that I would ask about the creative, informal ways police respond to crime — sometimes even tolerating certain anti-social or criminal behavior for (presumed) larger gains. Carl was eager to respond.

I will post Carl’s comment below, as well as the responses of two other law enforcement officials.

Carl wanted to make a single point: he felt cops should have the freedom to act as “judge on-site.” (See Chance‘s comment, #6.) Carl preferred working in poor communities because, in his opinion, they had a healthy distrust of the court system.

“You want to really lower crime?” Carl began. “Let cops enforce the rules. The whole way. You ask any cop on the street and he’ll tell you that he would love to dish out the punishment, on the spot.”

“You want to be the cop and the jury?” I asked, incredulously.

You laugh, but the good cops never let problems get to judges. They are judge on-site, I like to say. And, I don’t mean just for stupid things like kids shoplifting — you might get the kid by the neck, make him to apologize and work for the store owner for free. I mean for serious things.

In Chicago, back in the 1980’s, we had all these problems with drug dealers selling their dope on the street. We used to catch them and bring them in front of the older folks. We used to take their drug money and give it to all the neighbors on the block! They loved it, and the f–ing gangbangers hated it, of course. But, the people on the block always said to us, “We know you can’t get these guys off the streets, so keep doing what you are doing.”

“Isn’t that just a convenient excuse?” I pressed on. “Would you tolerate that kind of behavior in the suburbs where you work now? I can’t imagine any God-fearing middle class person would allow drug dealers to stand on their corner. I certainly wouldn’t.”

No, but around here [in Seattle’s suburbs] it’s all inside. But we actually still try to do the same thing. If we catch teenagers selling drugs, we take their money and give it to the school principal or to a block association — sometimes they take it, most of the time they shy away. The problem here is that people trust the prosecutor, the judges. Inner-city people know that these people are really useless. Around here, where you’ve got a lot of domestic violence, a lot of drunk driving, I would love to do other things to stop crime, but …

“Like what? What would you do for a drunk driver?” I asked.

Well, I hate taking that son-of-a-bitch to the station because those tests always fail and they get off (with little penalty). But these guys are a terror around here.

Everyone drinks and drives — especially those guys who drive home after work. I’d love to give them a tattoo, right on their forehead — like one of those scarlet letters. I’d like to get them all out on a Saturday and have them stand on a corner with a sign: “I’m a drunk driver and I’d like to wash your car for free.” I wouldn’t mind taking them around to do errands for others on their block for free on weekends. Or maybe they have to wear a bright orange suit for a month everywhere they go! You know what I mean? The courts don’t do sh-t.

Jordan is a 51-year-old police officer who works in New York. I met Jordan when I was studying prostitution. He was based in Manhattan, in Hell’s Kitchen, around the time when the police sought to rid the area of the sex economy — e.g., strip clubs, street-based prostitution, and video parlors. He also felt that the courts are largely impotent, but his pet-peeve was domestic violence. He says that he developed a set of skills that he now uses in “DV” incidents in the middle-class communities outside of Manhattan:

The one thing I hate is a wife beater. Or, anyone who beats women. I never arrest those idiots because they always get out of jail and go back and beat up their wives. It’s really frustrating. I have a daughter, and it just makes me sick … When I was in Hell’s Kitchen, I used to make those guys pay their women [prostitutes] extra, for maybe two months at a time, if they bruised them. You know, to make up for what they did. I’d just get their number at work and I’d call them and say, “Hey, you need to bring Shirley $500 because her kid needs school clothes. If they didn’t do it, I’d call their boss or show up at their job.

And, you know what? I do this now where I work [in wealthier areas of New York City]. These guys get arrested way fewer times [than the poor]. They think they are totally invincible because they make so much money. So, I do the same thing. Traders on Wall Street, lawyers — I don’t care. I tell them they have to pay up. I usually make them donate to a battered women’s shelter … See the one thing to know about these guys with money is that they HATE to give even a penny away! So it hurts. And, I take their money for months. A bunch of cops do this with me.

Bill is a retired police officer who worked in many Chicago neighborhoods. He made a list of, in his words, “the things that cops do to keep the peace that no one wants to know about.”

1. If a drug addict robbed somebody, we used to take his drugs away and give them to someone else. Then we used to make him watch his buddy smoke all his stuff. THAT was real pain!

2. Let people decide what to do with the gangbangers. The funny thing is that the gangbangers don’t mind going to jail, but they can’t stand it when people in their community get back at them. And, let me tell you something, parents who have children can get really pissed. They make gangbangers clean their streets, pick up trash, and stand outside and look stupid. The key is letting folks decide what’s best [in terms of] dealing with criminals.

3. Always deal with domestic violence on the spot. Make sure that when you catch a perp, all the folks on the block see you drag his sorry a– to court. Shaming somebody can sometimes be your greatest weapon. Hell, sometimes we will cuff the perp to the car, turn on the lights, and just keep him there until all the people get a chance to see him.

4. We like to play gladiator. You know what I mean? Let two gangs beat each other up without weapons, and the winner gets to deal on the corner. Or, we grab a bunch of muggers, or maybe two crews who steal cars, and tell them, “Okay, you all fight each other — the one still standing gets to avoid jail.” I know: it sounds awful, but believe me, this really works.

5. You have to let people get revenge. One time, I caught a guy who was running around stealing jewelry. So I asked the women — the ones who got their rings stolen — if they’d like to come over to his place and take something. Two of them said, “Hell yeah!”

I brought them to this guy’s house, and they took a bunch of his things — a TV, a painting! It was hilarious. This doesn’t happen often, but I think it would be a great way to stop people from doing the little things — you know, robbing, shoplifting, beating up people.

I was struck at the extent to which the drive for autonomy — the ability to act outside the formal system — was invoked by the police. The running theme in my conversations was their lack of trust in the courts. This is not entirely surprising since most cops believe there is a never-ending cycle of criminality in place whereby the punishment doesn’t deter the crime.

To some degree, the wave of urban “community policing” initiatives — whereby residents and police communicate more effectively with each other around — was supposed to rectify the situation. Community policing was developed by public officials in order to incorporate the informal social control mechanisms that exist in any community.

Here, one thinks of the “eyes on the street” approach of social critic Jane Jacobs, in which people police one another’s behavior, with law enforcement playing a mostly supportive role. But, it sounds to me like some police would like greater discretion to enforce the law.