Like many others, I was incredibly jazzed by Tiger’s victory on Monday.

But I was frustrated that the commentators routinely failed to mention the putting distance to the hole. It would be nice to know, “It looks like Rocco has a 25-foot putt.” But I, for one, would like commentators to go further and routinely give us information about the probable outcome of the next stroke. If the golfer is putting, I want to know the probability that the put will go in.

Analogous information is an old hat in basketball. When Kevin Garnett goes to the free-throw line, we are told what his FT percentage has been this season and in the playoffs (and in this very game).

Putting is not as standardized as shooting a free throw. But it would be useful to know that pros generally only make 60 percent of five puts. At least that’s what’s shown in this article (based on pre 1995 data): 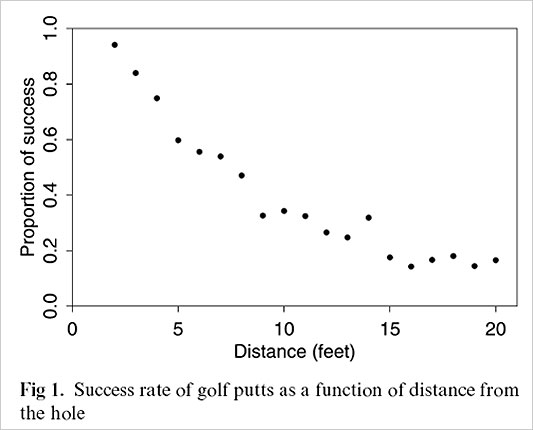 It shouldn’t be insurmountable to give player-specific probabilities conditional on distance to the hole or even real time predictions that take into account distance, player, and even place on the green. You can double check after the fact that your predictions are unbiased — simply by looking at the times when you predicted a 60 percent make probability and seeing if the ball sank 60 percent of the time.

For example, I bet few in the viewing public would have been able to formulate a very accurate assessment of the odds that Tiger would have made the last putt on Sunday.

After the fact, it’s too easy to say, like Mediate, “I knew he was going to make it.”