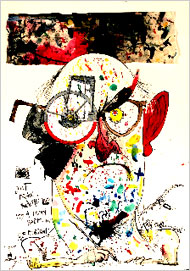 Last week we solicited your questions for British cartoonist and caricaturist Ralph Steadman.

He graciously fielded your questions about his friendship with the late Hunter Thompson (a “partnership and provocation,” he called it), why his work can be found on beer labels, and why an artist should constantly imitate himself.

Thanks to Ralph for his entertaining answers and to all of you for the good questions. (Our past Q&A’s can be found here ; if you have suggestions for future Q&A’s you’d like to see, send them here.

Q: Do you think your work has become more mainstream over time or do you think that tastes and mores have changed in your direction? Certainly in the 1970’s your work was popular in the counter-culture — now you’re getting recognition from Madison Avenue!

A: That suggests that you are talking about fashion. I can’t stop the passage of time any more than I can stop people thinking what they think. I cannot address that awful thought. I hope that I may have at least one or two things to do still that makes it all worthwhile. It is always a bloody struggle — and blood is what keeps us going.

Q: In Wayne Ewing‘s documentary, Breakfast with Hunter, you stated that, in your opinion, readers of Fear and Loathing in Las Vegas believed the artist and author to be one and the same. You also stated that without your drawings nobody would have noticed the story. Do you believe this or were you just trying to get a rise out of Hunter?

A: I would say anything to upset Hunter because he used to goad me ferociously and it became a game between us. I believe we treated our friendship as a kind of game, but a mutual admiration for what we both did separately kept alive a kind of delicious disdain. We could use the insult as an expression of love. I believe Wayne used some of my own footage in that film. Was I credited???

I always thought Hunter meant whatever he said. If he was insulting me I think he enjoyed it.

Q: How did you find your own style of illustration?

A: I couldn’t really draw so I devised a way of appearing to be able to. And the blots are clumsiness! So I made them effective and useful.

Q: While you were friends with Hunter was there ever a time that you thought he was acting or was that really the personality he had with everyone?

A: Hunter was acting for real and I was innocent enough to go along with what I thought he meant. Sometimes he did — and sometimes he got mad — but that would be because I was being a bit dim about something he cared passionately about.

I remember once when he was here in our house, stoking our log fire and he offered me a short synopsis of something he had in mind to write a book about. It was on the subject of The Silk Road and the drugs, spices, and strange materials of this cross continental passage.

I was worried about how high he was stoking the fire at that particular moment and pointed out that that would be enough stoking in case he set fire to the chimney. Because that showed apparent disinterest in what he was showing me, he just exploded, gave a primal scream, and disappeared up to the bedroom until the next morning. He was deadly serious about all that he embarked on — and I learned that lesson then.

Q: I have loved your works since the first time I looked at them in a book back in 8th grade. I love your distinct style and the freedom that is in your strokes and splashes. How do you create an individual style of artwork?

A: Mine evolved over nearly 50 years of struggling to learn to draw from the model or the still life. Style was not what I was interested in at first. You should not consciously try and “invent” a style at first. Explore your own clumsiness and look upon it as a virtue — and remember — there are no mistakes in art. A mistake is an excuse to do something else … imitate yourself!!

Q: Is there anything you won’t draw for a price?

A: I turn down stuff that is an advert produced from cheap labor — unfortunately so much stuff is now all done on cheap labor, so I don’t do a lot of stuff for that reason. I now do drawings with no specific purpose to see what comes out. A blank sheet can be anything.

A: Hunter had a Mynah bird called Edward. He kept it in a big iron cage. Then he would creep towards the cage and bang the wires loudly and say menacingly, “I’m coming to get you Edward,” and the bird would start to squawk.

Hunter would open the cage and grab the bird amidst more squawking and Hunter saying, “You cannot escape, Edward! I have you in my power,” and the poor bird would struggle and peck furiously at Hunter’s hands which held the creature. “Yes! Edward!! It’s me and you are doomed. There is no bird god who can save you now. It is futile to struggle — and I am hungry, Edward. Hungry!!”

Then he would simply allow it to jump back on its perch. I think they tormented each other for fun. The bird often sat on Hunter’s shoulder.

Q: I have a copy of your Mark Twain — were you a Twain fan or did you just fancy to draw the picture?

A: I have the Unabridged Mark Twain with a wonderful foreword by Kurt Vonnegut here right next to my working desk and I became very friendly with Kurt. I had read A Connecticut Yankee and Tom Sawyer because I thought I ought to. I enjoyed his travel books The Innocents Abroad and love his non-partisan detachment in all things. Objectivity. Like H.L. Mencken. Prince and the Pauper was a fantastic examination of social position.

Q: Was your work accepted at first? Did you have times when you gave up as an artist? If yes, why did you keep painting?

A: I was more interested in the doing of the work than the acceptance of it. Part of the journey has been achieving what I set out to do as though my life depended on it. I think about giving up everyday but change my mind because I haven’t yet saved the world. Better save the world first!!

Q: Does it seem odd/typical/fascinating to you that despite the originality of your work you are predominately admired through your connection with Hunter, and not perhaps the other way around?

A: I think that writers are always considered the significant contributors in any partnership. Artists, particularly “book illustrators,” which I loathe the sound of — as though artists don’t think and merely do as they are told. There is an elitist aurora surrounding writers which artists can have no part of.

Hunter hated the idea of me writing, telling me that it would bring shame on my family. But I have done books on Sigmund Freud, Leonardo da Vinci and God. Also, books on wine, a Dadaist novel called DOODAAA, America, paranoia and other Nobel Peace Prize subjects that the world refuses to acknowledge!

A: I would say that it was a partnership and provocation fired from both sides.

Q: Do you do a lot of preliminary drafts/sketches of your work? (It always seems so spontaneous at first look but then when I look at it hard it is well composed.) Do you do the blotches first and then work around them?

A: I don’t do more than a quick squiggle or two just to remind me what I am about to attempt. Spontaneity sets the rules and the blots just happen in the process. I see a lot more blots in other people’s work than I used to!

Q: What do you do to your pens to make them splatter in such an exuberant way? Or is it all in the wrist?

A: If you take a nib with the split in it you make it catch on the paper and it springs with a click and splashes the ink convincingly … I use the flick of the wrist when I have a brush loaded with ink which I use like a sign off.

Q: Who are your favorite artists in any genre, classic or contemporary? Your favorite writers? Where did you get those shoes?

I draw my shoes and make them out of paper.

Q: What is up with that beer on the store shelves sporting what looks like your artwork? Is that your brand or do you just make the labels?

A: I got involved with Hunter’s interest in it and his friendship with neighbor George Stranahan. Hunter wrote Good People Drink Good Beer and I did a picture of a Road Dog which is slang for someone’s prison cell mate. Then I did one of the Flying Dog and wrote “Good Beer. No Sh*t!” and the State of Colorado tried to ban it as something unhygienic on a bottle. But Flying Dog won the right to keep using it which they occasionally still do — for “Special Edition” brews.

Q: I was just recently reading the story that Thompson told about the two of you taking a rowing boat out to a yacht during the America’s cup to spray-pain “f*ck the pope” across the side of it — panic ensuing, you freaking out, Hunter letting off a flare to distract the law and causing a fire on someone’s else’s boat. How much of this is true?

A: All Absolutely true — Hunter had bought the black and the red spray cans in New York before we arrived in Rhode Island. We had no story by the end of the week, so as artist from England it was surely up to me to write something provocative on the boats. Thankfully we were caught before I carried out the ghastly deed. It was my first and only trip on Psylosybin and I ended up back in New York with no shoes and needing a doctor who asked me if I was “a regular kind of guy?”

“How dare you!!” I retorted, “What on earth are you suggesting?” The fire was caused by one of Hunter’s Atlantic distress flares landing on the deck of a moored yacht, which he let off because we had failed in our mission.

Q: As a side note, not many females seem to be taking part in this discussion, is it common for this kind of work to be recognized by a mostly male audience?

A: I hope not!! I love women. And they are very bright and extremely stupid in equal measure. Look at Hillary Clinton. Her ego nearly destroyed her. It was not the time to start b*tching.