The Economics of Bananas 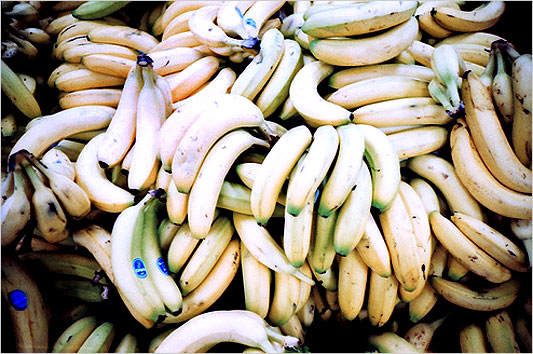 The papers yesterday were full of news about bananas.

The Wall Street Journal reported that Chiquita Brands International, “the Cincinnati-based banana distributor” (I love that phrase; it evokes Lardner, or at least Runyon), was expected to report a third-quarter loss due to higher fuel costs and bad weather in banana-growing countries. Chiquita stock fell sharply on the news.

The second article was far more interesting, and answered a question I’ve long wondered about: why are bananas so cheap relative to other fruit, especially since a lot of the fruit we consume in the U.S. is grown here while bananas are not?

Dan Koppel, author of Banana: The Fate of the Fruit That Changed the World, wrote an Op-Ed in The Times that is packed with interesting stuff about the Freudian fruit. The economics are particularly interesting:

That bananas have long been the cheapest fruit at the grocery store is astonishing. They’re grown thousands of miles away, they must be transported in cooled containers, and even then they survive no more than two weeks after they’re cut off the tree. Apples, in contrast, are typically grown within a few hundred miles of the store and keep for months in a basket out in the garage. Yet apples traditionally have cost at least twice as much per pound as bananas.

Americans eat as many bananas as apples and oranges combined, which is especially amazing when you consider that not so long ago, bananas were virtually unknown here. They became a staple only after the men who in the late 19th century founded the United Fruit Company (today’s Chiquita) figured out how to get bananas to American tables quickly — by clearing rainforest in Latin America, building railroads and communication networks, and inventing refrigeration techniques to control ripening. …

Once bananas had become widely popular, the companies kept costs low by exercising iron-fisted control over the Latin American countries where the fruit was grown. Workers could not be allowed such basic rights as health care, decent wages, or the right to congregate. … Over and over, banana companies, aided by the American military, intervened whenever there was a chance that any “banana republic” might end its cooperation. … Labor is still cheap in these countries, and growers still resort to heavy-handed tactics.

The final piece of the banana pricing equation is genetics. Unlike apple and orange growers, banana importers sell only a single variety of their fruit, the Cavendish. There are more than 1,000 varieties of bananas — most of them in Africa and Asia — but except for an occasional exotic, the Cavendish is the only banana we see in our markets. … By sticking to this single variety, the banana industry ensures that all the bananas in a shipment ripen at the same rate, creating huge economies of scale. The Cavendish is the fruit equivalent of a fast-food hamburger: efficient to produce, uniform in quality, and universally affordable.

Some readers may recoil at this description and vow to never eat another banana. Others may thank their lucky stars that free markets are able to deliver a tasty, healthy, peel-intact fruit to their corner stores at very affordable prices.

Koppel’s larger message is that the Cavendish banana is under fungal threat and may disappear. And, because Koppel seems to endorse the locavore movement (unlike some of us), he doesn’t sound all that sad:

In recent years, American consumers have begun seeing the benefits — to health, to the economy, and to the environment — of buying foods that are grown close to our homes. … [B]ananas have always been an emblem of a long-distance food chain. Perhaps it’s time we recognize bananas for what they are: an exotic fruit that, some day soon, may slip beyond our reach.

I am guessing this prognosis is alarmist but I have no way of knowing. Can anyone out there add some insight?