According to the Online Legal Dictionary, for an ad to be considered false, it has to:

Make a false statement of fact about a good or service (Airborne falsely claiming its product can cure or prevent colds).

Or “deceive or have the potential to deceive a substantial portion of its targeted audience” (the lottery claiming people can win a certain amount of money when they cannot).

Here are before and after shots of a model for a beer ad in Manila, sent in by reader Doranne Lim. False advertising or just some friendly Photoshopping? 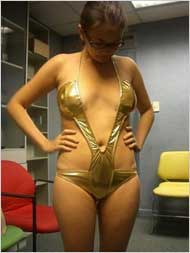 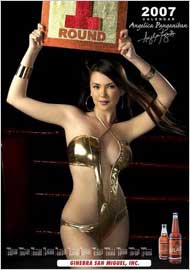 According to this study from the Journal of Advertising, deceptive claims are often masked by humor. In the following ad, humor and a deceptive claim (you can’t be Kanye, sorry) are used to mask the advertiser. (Hint: The advertiser’s name appears in the first starred bullet point.) 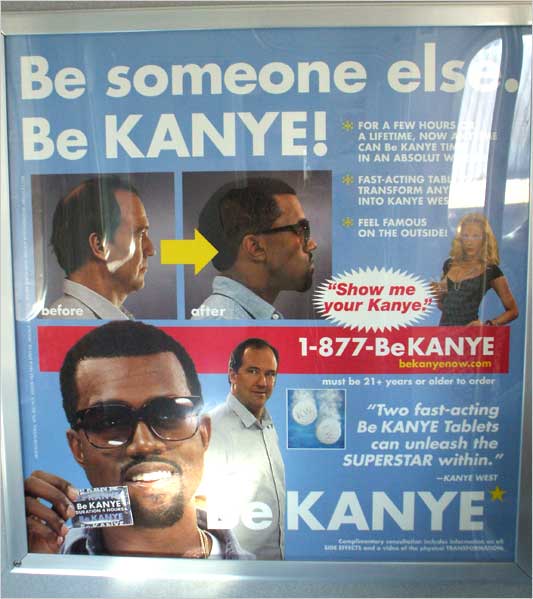 Meanwhile, there’s no question about the honesty of this store in Rome: 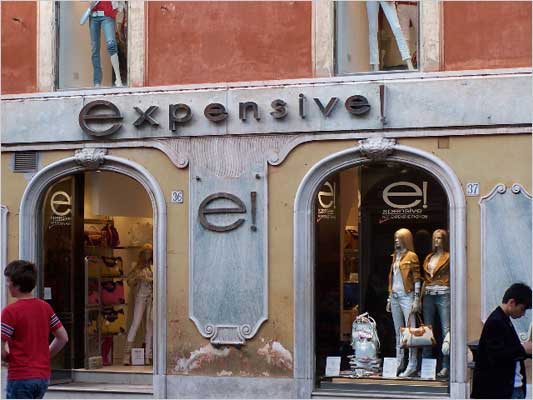 the model in the swimsuit? it's the same woman.

I've worked in the ad industry for many years. I've had models come into the studio with no makeup, blotchy skin, hair back in a rubber band, and dressed like Laura Ingalls Wilder. On a few occassions, I've almost sent them back they came in so unattractive. An hour later, these same women under the guise of a talented makeup artist, stylist, and their own modeling experience, would make any man's heart beat double. In this Philippines ad, the only thing that appears to be obviously Photoshopped are the breasts. Everything else was certainly touched up but also easily explained. Also, you see a lot of Asian ads where the women's skin was obviously whitened. This probably happened too.

Are you sure that you aren't missing the point of the ad with the two models? It's a BEER ad, and no doubt intended to demonstrate how consumption of the product by a guy can dramatically improve the appearance of the women he sees. :-)

Not to repeat too much, but for Fatima, in #34, the model's name and printed autograph are on the upper right corner of the poster.

For Jules, #33, the difference in photos answers your question. Most guys (and women too)see the difference. In fact, they see the difference every day because neither their significant other (nor they, themselves) match the ideal. It's the source of most advertising themes - that "with this product" we can (exclusively)have some ideal level of attractiveness, sexiness, reproductive opportunity (the real, natural. purpose of genetic superiority and selection) and thus happiness. Drop the attractiveness theme and advertising ceases to exist (and high school ends).

Unfortunately, this ad from Manila isn't for beer but for gin and other similar hard drinks.

It is a question of which picture was photoshoped ? I believe both...

"I read a book once about a guy who was hired to blog a cross-country Playboy bunny search."

If you're talking about the women who pose for the Playboy centerfold, the correct term is Playmate. A "Playboy bunny" is a waitress in a Playboy Club. The two terms are not interchangeable.

If you follow the link provided by #36, you will see that this is a fraud -- the women in the pictures are wearing two different swimsuits in each and every picture. Similar, but different.

I know who the model is, not in person but I do know her. She's an actress in the Philippines, and no, I don't think she's the girl in the first picture. I saw both pictures on a search engine and I saw the first picture in a fan's website whose cosplaying the girl on the right.

Although there's nothing wrong with both pictures, I thought I just needed to clarify that.

If I'm wrong, correct me. The filipino actress' name is Angelica Pangaliban.

I used to walk by "expensive!" everyday when I lived in Rome. They are not expensive at all, compared to Gucci and Hermes just down the street.

I think before is much more attractive

I doubt Kayne did much but pose in an ad devised by others. For money.

Not gonna lie...I' vebeen trying to figure out the point of that Be KANYE ad for 2 weeks now. How is this useful for Absolut? NO ONE noticed that on their own.

The before and after pic of the model is priceless! You just made my week!

As they aren't actually selling the tablets in question, I'm not sure what the deception is. It's not like they're claiming that drinking vodka will turn you into Kanye. Or even Mel Gibson.

I doubt much Photoshop went into those before/after pictures of the model. If you look really closely at it, you'll see that the major differences are:

* Hair style (the "before" picture is obviously before they let her hair down, styled it, etc.)

* Glasses (her glasses make her a bit less glamorous)

* Pose (that particular pose in "before" is much less flattering to her particular body than the "after", but if you look closely, all of her proportions seem to be the same)

* Lighting (the lighting in the "before" picture is horrible, looking at the scenery, it is probably flourecent lights which make *everyone* look bad)

* Head positioning (the position of her head in "before" is not attractive, and does not let us see her face at all)

Overall, I am sure that the makeup and Photoshop crew had a lot to do with the differences, but not nearly as much as the other folks commenting make it out to be at all.

to #7, the model in the pic is a talented actress in the Philippines and she definitely has a following here. that's why, the company made an effort to hire her and manipulate the picture and have her look really good. this actually became a big issue here for a while as a lot of these "before and after" pictures circulated in the internet. :)

Glynis, you're absolutely right. I also find the so-called "unattractive" woman, the most beautiful. When will we wake up to the fact that we are totally manipulated by advertising to want things we don't need, things that are bad for us and the environment, etc. Just look at the current craze over things like Vitamin Water (colored sugar-water), bottled water (the most amazing advertising success story of all time), gas-guzzling, traffic-stopping huge trucks and SUVs, drugs to cure everything, the list goes on and on. It's past time to wake up and smell the plain old coffee--not Starbucks.

I was on my way to a Yankee game on Monday when I spotted the Kanye ad. It was funny, I admit, but in a hokey sort of way - you know, haven't we seen this before? So I inspected it, and surely enough, spotted the very fine print along the left side of the ad that revealed it to be an Absolut ad (although I didn't catch the reference next to the asterisk). Very interesting strategy by Kanye... I think it's shrewd subliminal advertising that will inevitably get people to the website cited, and perhaps undercut Diddy's efforts to front Ciroc (which I also just found out is not actually vodka as defined here in the US). So at #12, I guess it is possible to identify the ad as such, and not simply filler on a subway car.

Re: #7. Because it's a lot cheaper to pay a some whiz-kid with a computer to do the image manipulation than to shell out the money for the model that does look like that.