I blogged last week about blind wine tastings — my own casual experiments as well as some more serious academic ones. The bottom line is that in blind wine tastings, there is a zero or even slightly negative correlation between the ratings of regular people and the price of the wine they are drinking; for experts the relationship between rating and price is positive. 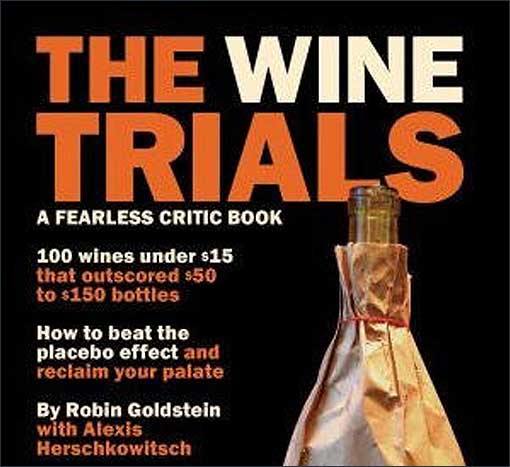 Robin Goldstein has an excellent book, The Wine Trials, which describes the blind wine tastings and which cheap wines people liked. The beauty of this book is that you can bring an $8 bottle of wine to a party and explain that it tastes better than the $28 bottle you would have bought. If the host of the party is an economist, you can tape a $10 bill to the bottle for an even split of the joint surplus.

Not until I read Goldstein’s book did I realize just how weak the correlation was in blind tastings between expert evaluations and price in experimental settings. Yet, somehow Wine Spectator, which claims to do tastings blind (at least with respect to who the producer is), has an extremely strong positive correlation between prices and ratings. Hmmm … seems a bit suspicious.

It turns out that the story with respect to cheap wine is even more true for champagne. I’ve never tasted a $12 bottle of champagne that I didn’t enjoy immensely. It turns out I am not alone. In blind tests, Domaine Ste. Michelle Cuvee Brut, a $12 sparkling wine from Washington, is preferred nearly two to one to $150 Dom Perignon if you strip away the labels.

Dan Ariely (author of Predictably Irrational) and his co-authors have an interesting experiment with beer and balsamic vinegar. If you tell people ahead of time there will be vinegar in their beer, they won’t like the taste. If you don’t tell them and do a blind tasting, they do like the taste. If you let them form their opinions and then tell them there was vinegar in the beer, most continue to say it tasted good.

I am generally skeptical of neuro-economics, but here is one such study which finds that the firing of neurons in the brain is affected by how much the subject thinks the wine he/she is being served cost. The bottom line seems to be that if you think a wine is more expensive, you really do enjoy it more.

Finally, a wonderful tale published in The New Yorker a year ago, written by Patrick Radden Keefe, profiled an ambitious conman who fooled the world’s leading wine experts for more than a decade before his nefarious plot unraveled. I can’t remember the last time I read an article this long from beginning to end in one sitting.