Last week, I learned two important things. They both happened as the result of a post I wrote about various errors, typographical and otherwise. I noted that the excellent Economist magazine dropped an “r” from the word “pastries,” inadvertently rendering it “pasties.”

Well, The Economist was not wrong but I sure was. Many readers informed me that a pasty (pl.: pasties) is a small Cornish pie often filled with meat and vegetables.

The other thing I learned is perhaps even more valuable. In the comments section of the pasties post, a reader named Petréa Mitchell informed me that “You’ve just encountered Muphry’s Law (no, not Murphy’s).” According to this site, Muphry’s law states that “if you write anything criticizing editing or proofreading, there will be a fault of some kind in what you have written.”

In other pasty news:

On a long family drive this weekend, we listened to most of the first Harry Potter book on tape. (Yes, Jim Dale is fantastic; I truly would listen to him read the phone book, at least the A’s.) And sure enough, as Harry takes the train to Hogwarts for the first time there is mention of a pumpkin pasty. Unless I had made my pasty snafu earlier, I doubt the word would have caught my ear. As it was, my wife and I laughed aloud, hard. Yet another case of confirmation bias, sort of.

Upon our return, we found that a mysterious box had arrived by Federal Express. It was the size of a hardcover book but not quite as heavy. Under the FedEx wrapping, here’s what the box looked like: 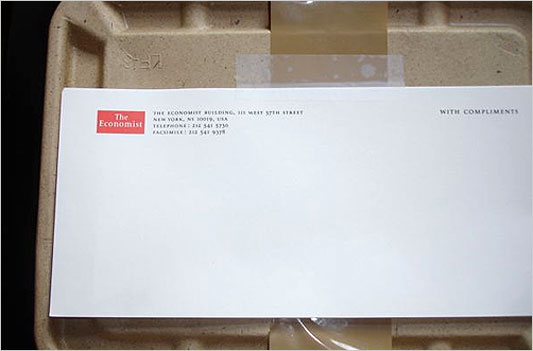 Hmm. I recently resubscribed to The Economist; perhaps they were sending me a little gift?

Well, yes and no. There was no note but inside lay a pasty: 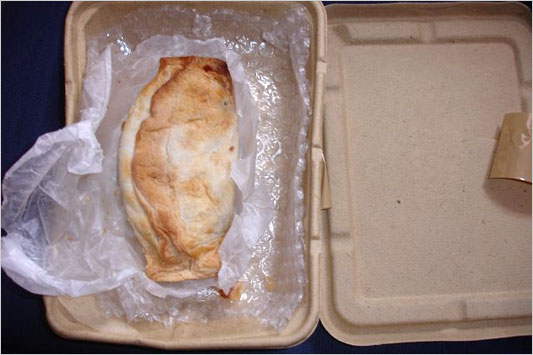 I have to say, it didn’t look very tasty. Maybe it had spent too long in transit. Inside, it looked like this: 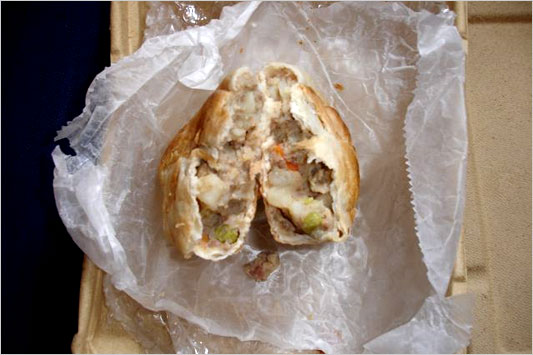 The meat was, I believe, chicken. As you can see, there was also evidence of pea, carrot, and potato. I assumed that if The Economist was good-natured enough to laugh off my wayward criticism, they weren’t going to poison the pasty. So I took a bite. Yum! While it’s probably not so smart to eat food that arrives quasi-anonymously in the mail, I took another bite and then a third. I look forward to my next U.K. trip so I can eat a native pasty. My sincere apologies to pasty eaters everywhere. Apologies also to The Economist, and thanks.