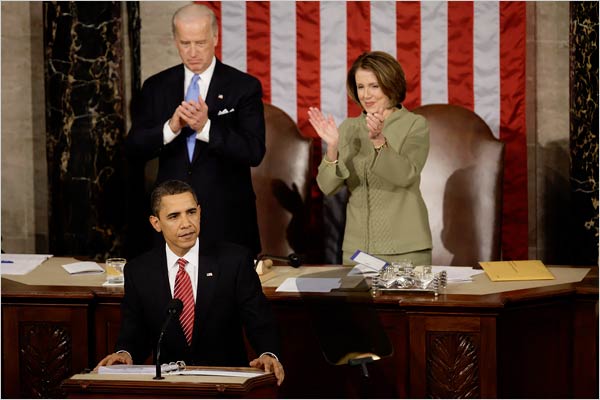 Our friends at speechwars.com have put together a really fun tool to help you mine their database of the full text of all State of the Union Addresses (even though this wasn’t technically such an address) as well as inaugurals. It’s a fun way of tracking which issues have occupied the minds of our leaders. The brains behind Speech Wars, Ben Reis, just sent me his lightning analysis of last night’s speech:

— Obama is the first president in history to use the words “bailouts,” “laundry,” “drapes,” “cyber,” “messes,” and “pandemic” in a State of the Union address.

— Obama used the word “crisis” 11 times — more than twice as much as any other president. Hoover used it only four times in 1932 during the Great Depression.

— Obama said “layoffs,” “invest,” and “entrepreneurs” more than any other president.

— Obama is only the second president to use the words “ferret,” “biofuels,” and “hybrids.”

For those of you who wondered who the _first_ president to say "ferret" was, it was Eisenhower in '55.

I'd love the speechwars folks to diversify and produce a web site that compares the politicians speeches with the eventual results of their ideas/ plans. I'd like it across all politicians from all parties, including the executive branch.

Talks is cheap and action is expensive. Once action is taken there always will be the ever present unintended consequences, major or minor.

Things certainly have changed. Did you check to see if Geo. Washington might have mentioned "ladies" instead?

Here are some other feminist firsts:

Interesting how the roles of women in the public eye evolved.

Did anyone but me notice that First Lady Michele Obama wore a very plain dress and did not wear a necklace? I would have thought Tiffany, Fassbinder or Harry Winston would have loaned her ANYTHING.

Concerning the word"crisis", none of the other Presidents had to face 8 years of crisis background esp. the one which included engaged troops and wars in foreign countries and not just the supplying of war materials to other countries.. great depression back in the 30's had a possible cure. supply war related stuff to other countries, but it didn't face the aspect of actually engaging soldiers to this extent...

Lisa...chill. This "evidence" rests upon shakey ground. The presidents did not really give speeches in front of congress until the modern era. And Indeed LOTS of mentions of women, women's issues, etc were written about extensively by presidents. All these guys have giant piles of papers. Where did they find the time...?

True, the word "women" seems to be scarce in delivered speeches (of which there are relatively few), but politics was strictly a man's prerogative until long after Lincoln. Many other words are scarce too. This does not mean much.

Get over it. Please.

Obama has never given a State of the Union address.

Wait a minute... last night was State of the Union? I thought it was a session in which the President addressed Congress!

I'm so confused, on account of being Canadian, I guess.. ;-)

"Sometimes, especially in recent years, newly inaugurated presidents have delivered speeches to joint sessions of Congress only weeks into their respective terms, but these are not officially considered State of the Union addresses. The address is most frequently used to outline the president's legislative proposals for the upcoming year."

"Since 1989, in recognition that the responsibility of reporting the State of the Union formally belongs to the president who held office during the past year, newly inaugurated Presidents have not officially called their first speech before Congress a "State of the Union" message."

Still, these first-year-of-first-term speeches are still considered by the public as informal State of the Union addresses, since if it was a president were entering his or her second term, they would be giving an official state of the union address that night.

I find it interesting (but not surprising) that the score is:

and not to be left off

re: #3
Talk *is* cheap. (So are transcripts, I imagine.) What you'd suggest would take way way way more manpower than some text banks and a few lines of code.

"Love" being an intangible emotion that doesn't say anything concrete about government and "war" being something we have to face that is universally considered to be negative, I think I feel safer with a president talking about "war." Realism > demagogue.

I think it's indicative of our concrete-bound culture that we're somehow analyzing what words he used and not what he actually said...

Vin - you mean that FDR (or, if you count new presidents, Truman) didn't have a decade of depression in his past? George Washington didn't have years of a tumultuous government that even led to the creation of a whole new system? The years leading into and during the civil war wasn't a crisis?

Methinks you ought to go back and check that out. Your Bush Derrangement Syndrom has made you forget basic history.

you missed the qualifying of the President's speech- How many times did he use the expressions "we," "our" "us." seems like the op.ed. page has been using these expressions alot lately- Hmmmmmmmmm!

Do you people seriously think reading what some speechwriter has pinned down really counts for anything? C'mon... There must be better things you can look out for in the president. Words in speeches???

Bill Clinton was the first and only president to use "yo" during a presidential speech. Respect.