ESPN Makes News But Doesn't Know It; Credits Letterman Instead 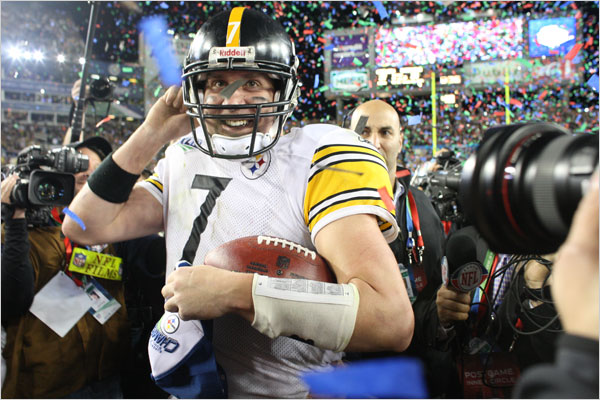 I’ve made no secret of my Pittsburgh Steelers fandom — the most recent example is here — and so yes, Sunday was a happy day in our house. The problem is that my productivity suffers afterwards because there’s so much post-game stuff to monitor.
For instance, I just watched a SportsCenter report on ESPN, which discussed Ben Roethlisberger‘s appearance on David Letterman‘s talk show last night. ESPN reported that Big Ben “made news” on the show by divulging that he initially thought his game-winning touchdown throw to Santonio Holmes (and yes, Roethlisberger should have been voted the game’s M.V.P.) had been intercepted by Arizona.
Interesting, for sure. But news? Actually, Roethlisberger told ESPN itself the same thing perhaps an hour after the game, in an on-site sitdown with Chris Berman and others, in a “Sunday Conversation” interview. So ESPN broke the news but then credited Letterman, a full two days after the fact. Maybe the network needs to make its transcripts available faster, or more searchable, or something.
To me, the more interesting point is this: the winning quarterback in the Super Bowl thought that the pass he threw to win the game was actually the game-losing throw. That’s how tight the margin is in a sport like football. What kind of person is able to make that decision — to throw or not to throw — in such an instant? I am convinced that my brain barely resembles Roethlisberger’s at all, for it takes me at least 30 seconds (and usually far longer) to choose between the chicken and the pasta.