The Danger of Safety 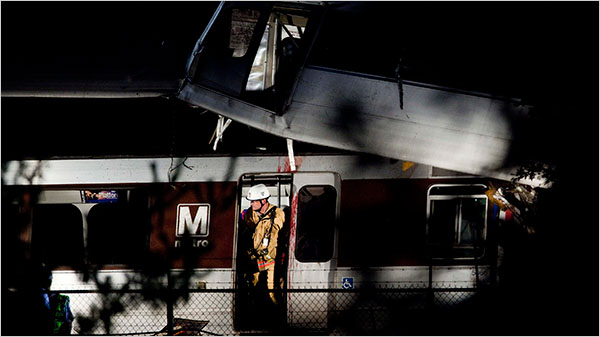 In case you haven’t heard, an accident on the Washington metro claimed nine lives last week. But then again, chances are you have heard, as the crash got wide coverage over the airwaves, on the net, and in the papers (by my count, at least five articles appeared in The Times). This is usually the case when trains or planes are involved in deadly disasters.

But what the media very rarely mention is that the carnage on our roads makes these much-hyped accidents look almost trivial. Nine lives is nine too many, but there were 39,800 motor vehicle traffic fatalities in 2008 alone (and that was a good year). At that rate, between the time of the accident, June 22, and the time you are reading this, on average about 1,000 Americans died on our roadways. Yet this rarely merits a mention by the press.

Why the disparity in coverage? I don’t think it has anything to do with any particular animus toward transit; on the contrary, I personally think the press has a pretty strong pro-transit slant.

Instead, a number of factors are probably at play. A flood of simultaneous deaths seems to titillate us more than a steady drip (and let’s not forget that we are being titillated here, or the media wouldn’t be serving these stories up). There’s probably a threshold effect at work, as a certain plateau of deaths triggers the dispatch of reporters. Perhaps crashes involving larger vehicles are more “photogenic.”

And I think there is one more key dynamic. Heavy rail (the mode in the Washington crash) is a lot safer than car travel; in 2006 (the last year for which I have data) autos were responsible for five times more fatalities per passenger mile. (See here for auto fatalities per year, here for transit fatalities, and here for passenger miles traveled by mode.

In 2007 and 2008 there was not a single fatal accident associated with a major commercial airline. This year has seen 60 deaths (most from a single crash), but that still makes commercial air travel vastly safer than driving. Even in 2001, the year of a (hopefully) freak disaster on 9/11, commercial air travel had a per-passenger mile fatality rate about one eighth that of driving (see here for air fatalities).

The relative rarity of air and rail disasters makes them novel, and hence news. Car crashes bite man, and rail and air crashes bite dog. Intensive coverage of the few air and rail accidents that do occur in turn promotes the widespread — and erroneous — inference that planes and trains are unsafe. In an unfair irony, in transportation perhaps too much safety can be a dangerous thing.

I didn't hear about it. Been under a rock. I suspect you are right though. It's about the "oh, this is different" factor more than the "i'm appalled" factor.

When did you write this article? There has been 228 fatalities on Air France Flight 447 last month and Yemenia Flight 626 took possibly another 152 lives on June 30th. According to Wikipedia there has been 22 Aviation accidents this year up to date.
As for the rest of the article, I do agree with news hyping up mass accidents.

What about individual car crashes with an especially large number of deaths?

There is also the interest because we have no control over the train crash. We, probably falsely, believe that if we are driving we have enough control to steer around or stop in time to avoid an accident. In plane, train, bus, etc. we give up the control to someone else.

I think you can rationalize the idea that people find car travel safer since they are the ones with control over the vehicle. Plane and train crashes feature a roomfull of helpless strangers, for the most part, while in any car accident there is a relatively high percentage of preventability via defensive/clever driving to counteract the developing factors in the crash.

There's been already two accidents with commercial airplanes this year, the death toll is probably around 300.

Your point still stands, of course.

Maybe also has something to do with the fact that a driver can change behavior to avoid crashes (by driving slower), while rail and plane commuters are helpless once they are on the plane

I suspect that part of it is the idea that we feel that road deaths are mostly under our own control -- that we, the driver, control if we have a fatal accident or not. On the other hand, train and plane crashes are just fate, something that happens to us randomly, caused by the actions of others. That's scarier.

I think this has more to do with the number of lives snuffed out at once, since bus crashes also get coverage, and airplanes that carry just a couple of people happen frequently with little coverage.

Perhaps if our cars and motorcycles went 550 mph and carried 100 passengers at a knick, there would be equity in the disaster-coverage department.

It has nothing to do with who has control.

This is a well-studied psychological phenemona called "the availibility heurisitc." People will always believe that certain things happen more often if they are more available in their memory based on the news, media, etc. This is the same reason that parents are always worried about child kidnapping when in fact, it occurs very rarely but is on the news too often.

The article and it's statistics are referring to accident and casualty rates in the USA, not globally. That's why Air France and Yemenia aren't taken into consideration.

I always thought that if the newspaper wrote about every single death by auto describing the details ( type of car, seat belt, alcohol or drugs, sad story about the surviving family, etc.) as some do about Iraq American war dead, there would be a huge outcry about this (since there are so many more a day, and the stories would be often just as sad), and car safety, road safety, DUIs, etc. would be fought for even more. It would put things ( such as number of war dead, number killed in trains and planes) in perspective.

I've talked about this same point to others in the past. The rate of car crash deaths in the USA is equivalent to two full jumbo jets going down EVERY WEEK, and yet it gets only local coverage unless it's someone famous or above a quantity threshold, like a van full of kids.

1) Rapid transit trains, such as those in DC, are light rail trains, not heavy rail.

2) It has always fascinated me that a light plane crash which kills 2 to 6 persons receives widespread national media attention (including the New York Times) while automobile collisions involving similar numbers of casualties rarely are mentioned except locally.

what about Marx's point that "the masses having nothing to lose but their lives." Individuals die every day, but only certain people are acknowleged at death. There is something about large numbers of people dying simultaneously that makes death seem different, unusual or out of the ordinary. I wonder if the same principle applies with the economy. We heard about all the wealthy people who lost their money with Madoff-- But what about all the ordinary people whose money was lost in homes that they invested in that are now worth less than the original investment or in the stock market because greedy money managers offered poor advice. So I wonder whether or not Madoff was really a scapegoat for the sins of others (just on a different scale). This brings me to a question that I have been struggling with myself-- Obama's plans to boulster our economy. How much of it involved the use of real knowledge of what will really repair the situation and how much appearance. I moved into a house that looking at it now, after 3 years, was made to look good on the surface. I inherited bank stock that went up recently apparently due to a surge in optimism coming from Obama's winning the election and the bail out money it received, but not due to real optimism coming from real changes in the ways the bank does business. I am awaiting such real changes. Must we experience tragedy on a large scale for such changes to be introduced. I hope not. I don't think it can be "business as usual" any more.

The things we fear are often not dangerous and the dangerous things we don't fear. There are many good examples and our time seems to be more medieval than the Middle Ages in this regard (as in many others). There are two recent books on the subject: Risk - The Science and Politics of Fear (Dan Gardner) and Panicology (Simon Briscoe and Hugh Aldersey-Williams). Panicology is particularly interesting since it rates various phenomena on three variables mentioned quite often in this thread: How scared/alert people/media tend to be towards something, how dangerous that something really is (as the authors assess it) and how much people can do about it (control). Interesting read.

The incident in Washington was certainly horrible, but I think it brings to light just how safe Metro actually is in DC. It would be interesting to see the number of deaths among commuters to DC during the same time Metro has been operating.

Its also interesting, in light of comments 5, 7, and 8, that metro riders have been avoiding the first and last cars on the trains (I take metro daily, and noticed on my commute), it seems people are trying to obtain some sense of control by avoiding the (potentially) most dangerous cars.

I disagree with you. I think a train or plane crash is considered more noteworthy and more upsetting to people because it's more *out of our control.* We can't control if our plane goes down, or if our train freakishly derails. But we delude ourselves into thinking that we are masters of our own fate when we are in our own car. The feeling of power that we have when we are behind the wheel (or even in the passenger's seat, where we can keep an eye on things and warn the driver!) gives us a sense of security.

It's not the statistical chance of dying that scares us - it's the notion that our fate is not in our own hands.

That's why press stories of mass transit crashes are more common: They are more jarring to hear. We hear about a train accident and imagine it could have been us, and we subconsciously realize there would've been nothing we could do to avoid the accident. When we hear about car crashes, we subconcously think that we could've driven more skillfully or carefully than whoever the unfortunate fatality was.

error- I remember now- the source is Max Weber's understanding of the difference between elites and masses--but it sounds so much like Marx.