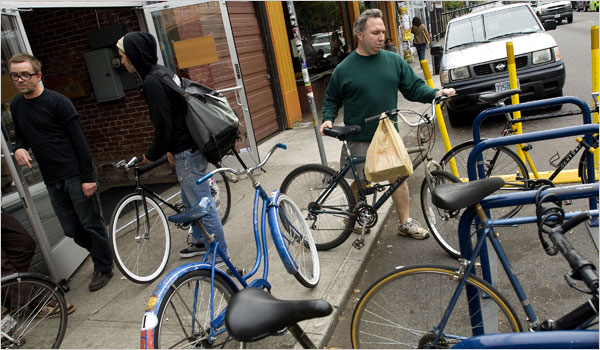 Portland, Oregon, the current darling of America’s food and environmental writers, is arguably the county’s most bicycle-obsessed city. Bike use was up 28 percent in Portland between 2007 and 2008, and on the Hawthorne Bridge, a main thoroughfare, bikes now make up 20 percent of all vehicles. The New York Times estimated in 2007 that there were 125 bike-related businesses in Portland employing 600 to 800 people. There’s even a store in the city that sells only tricycles.
When I arrived in Portland last month, the first thing I wanted to do was buy a bike and get around the way the locals do. Since I wouldn’t be in town for too long, and it wasn’t clear that I’d be able to take the bike with me when I left, I wanted something extremely cheap.
There were bike shops on every other corner in Southeast Portland, the sort of Brooklyn-ish neighborhood where I was staying. I walked into what looked like the grungiest of them — a store that sold mostly used bikes. There was one employee, and he was heavily tattooed and seemed pretty cool. I completely leveled with him: I didn’t know anything about bikes, really; I could barely change a tire; I was only going to be in town for a little while; and I wondered if he had something cheap that I could use for puttering around town.
I know this is sort of quaint, but the last time I bought a bike, I think I spent $35 and it wasn’t hot. It was a road bike; it had 18 speeds, I think; it squeaked; and it served my needs (biking from my house to school every day) perfectly well. (The bike later died a peaceful death at Burning Man, but that was due to maltreatment, not poor quality.) I was looking for something like that.
The guy in the store asked me how much I wanted to spend.
I sort of stuttered my way and ultimately refused to answer the question because I was embarrassed to say something like “less than a hundred dollars,” for fear of coming off like Borat inspecting the Hummer before buying the ice-cream truck.
Yeah, the bike guy answered, he had something super-cheap for me, an old road bike that they’d fixed up. It wasn’t exactly my size, but it would do. It was a 1991 model, a Trek, I think. It was in good working condition, it had some newer components, and it came with a warranty. I could have it, he said, for $475.
So I went to another store. Same deal, more or less. There was one bike for $275, but it was a girl’s Raleigh from the 1960’s with a wicker basket.
I started looking around the web. At the down-to-earth-sounding Recyclery, another Portland used bike shop — and probably a great one — there are currently 59 used bikes on offer. But 34 of them cost more than $1,000, only eight are priced under $500, and there are none under $300. Even to rent a bike for one week from the Recyclery costs $175 — more than I paid for my weekly rental car the previous time I was in Portland.
At Portland’s Costco, meanwhile — on the outskirts of the city — you can buy a brand-new Schwinn Midtown city bike with Shimano shifters for around $200. But, according to the clerk there, those Schwinns aren’t moving.
I don’t doubt that the Schwinn Midtown is a far inferior bike, from the point of view of a bike connoisseur, to whatever is being sold used in Portland. But you’ve got to love a city whose citizens put a set of moral/aesthetic principles — whether it’s riding a bike with proper disc brakes or refusing to support the Big Box stores — this far above their own financial well-being. And although every city has its bike aficionados, I think that in Portland, most people just buy rebuilt bikes locally because it feels right to do so, not because all these everyday bike riders can really tell the difference between Shimano TX-30 derailleurs and M-970 XTR’s.
Still, what’s up with this bike micro-inflation? Why does there seem to be no market in Portland for used bikes that are actually cheap? Portland is otherwise a pretty cheap city. Beer is cheap. Used clothing is cheap. By major urban standards, housing is cheap too, unless you compare it to the strip-mall-type cities. And certainly there are plenty of people in town who can’t afford to spend $475 — never mind $1,000 — on a bike.
I asked a few people in town about this and got some general sense of agreement and common frustration: cheap bikes are impossible to find around here. The word on the street was that so many people are selling their cars (or taking their cars off the road) and using bikes to commute to work that there just aren’t enough bikes to go around. I also heard about a guy who was actually in the business of bicycle arbitrage; he would immediately snap up the few cheap bikes that would come up on Craigslist, fix them up a bit, put them back up on Craigslist, and make a good profit.
So I started looking at Craigslist — not just in Portland, but in other cities too, and not just at bike prices, but also at car and truck prices. I looked at a wide range of midsized-to-large cities that I thought represented a diversity of urban layouts, bike prevalence, wealth, and so on: Austin, Miami, New York City, Phoenix, Portland, San Francisco, and Seattle.
From each of these cities I collected an extremely basic data set: the asking prices for the 50 most recent cars, trucks, and bikes advertised. I excluded children’s bikes, frame-only bikes, and non-working bikes; I excluded non-working cars and cars that were being sold for parts. I also excluded obvious dealer spam from each. Then I looked at the medians. Here’s what happened: I didn’t run any serious statistical tests on the data set. This is because there are a few fundamental problems, the largest being that we’re not comparing apples to apples in terms of what’s being sold. That is, we don’t know if the same types of bikes are being sold for more in Seattle than in Phoenix, or if there are different types of bikes being sold in the two markets. The ads also change so frequently that replicating these results might be difficult; and 50 data points might be too small a sample.
Still, whether it’s over/underpricing or just selective selling, what struck me about this informal little analysis was that not one city fell out of line in the inverse order. Where cars were selling for the most, bikes were selling for the least; where cars were selling for the least, bikes were selling for the most; and so on, inversely, in between.
So, it looks like even though there are tons of bikes and bike shops in Portland, there still aren’t enough sellers in town to satisfy the strong demand in this bikers’ paradise. Perhaps in the long run, when enough arbitrageurs start shuffling bikes around the country (and enough arbitrageurs start underpricing each other to drive down their margins), more cheap used bikes will become available in the bike-friendly cities.
In the meantime, if you’re a Portland or Seattle resident thinking of selling your car and going green, maybe you should drive down to Phoenix and ride a bike back. You’d leverage both sides of the inverse relationship — plus there’d be some beautiful scenery along the way.